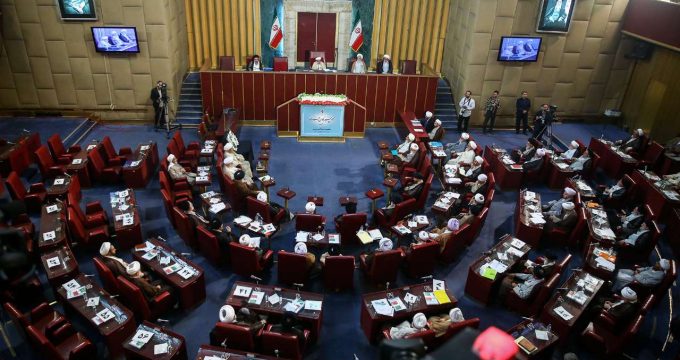 Iran’s Assembly of Experts ended its annual meeting on Wednesday with issuing a final statement.

In the statement, the Experts point to the problems with Iran’s economy, calling for reliance on domestic resources to resolve them in line with the principles of the Resistance Economy, as they have been outlined by the Leader of the Islamic Revolution.

The statement reads that “with proper management of the distribution and supervision system and support for knowledge-based companies, small and medium-sized enterprises, the reinforcement of the cooperative sector and, most importantly, the activation of economic diplomacy, particularly in relation to the neighbors, the country can grow immune against the sanctions and the regional status of the Islamic Republic will further be enhanced.”

“Joining of the Islamic Republic to international conventions such as [FATF-related bills of] Palermo (United Nations Convention against Transnational Organized Crime (UNTOC)), and CFT (Combating Financing of Terrorism), etc., in response to the enemy’s demands, is a strategic mistake,” further reads one of the clauses of the statement.

The Experts also call on the Expediency Council (which is reviewing the FATF-related bills after they were rejected by the Guardian Council after they had been approved by the Parliament) to take into account the dignity and the interests of the country and pay enough attention to the conspiracies of enemies against the Islamic Establishment.

They also call for unity and avoiding division among Islamic Ummah in the face of threats, condemning the plots and warmongering policies of the ‘criminal’ United States in Islamic countries such as Iraq, Syria, Afghanistan, Yemen, Bahrain and Lebanon.

The statement also emphasizes the strengthening of the strategic relations between the Islamic Republic of Iran and the Iraq and other neighboring countries.