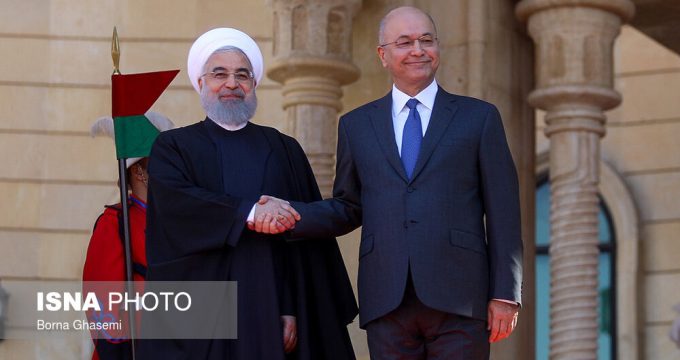 Al-Monitor – The geo-economic aspects of President Hassan Rouhani’s visit to Iraq couldn’t be more pleasing to Iran’s conservatives. Ever since the US departure from the Joint Comprehensive Plan of Action (JCPOA) last May, conservatives have urged Rouhani to bypass Washington’s reinstated sanctions by focusing on trade with neighbors like Iraq as opposed to the Europeans.

Rouhani expressed his willingness to augment his country’s volume of trade with Iraq by some 66%, from the present $12 billion to $20 billion. This received a rare standing ovation from hard-liners at home. “A $20 billion opening appears after the deadlock with Europeans,” wrote Javan, a conservative daily that reflects the political stance of the Islamic Revolutionary Guard Corps. Rouhani’s visit, according to the paper, was a demonstration of Iran’s political might against “ill-wishers and disrupters” of regional stability. “The visit’s clear signal,” Javan maintained, is that “in today’s world no country is able to place a powerful Iran under an economic siege.”

Hard-liners are now confident that the fresh trade deal with Iraq is large enough to neutralize US sanctions. Kayhan, which is close to the supreme leader’s office, hailed the agreement as “a slap by Iran and Iraq” in the face of the US government. “The American dream to sabotage political and economic ties between Iran and Iraq will never come true,” Kayhan added. The paper described the closeness of Tehran and Baghdad in recent years as a fruit of Iran’s “advisory role” in the fight against the Islamic State.