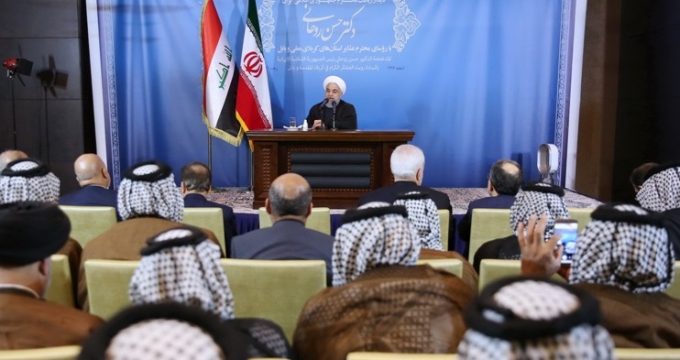 Rouhani: No power can separate unified Ummah of Iran, Iraq

IRNA – President Hassan Rouhani described bonds between the Iranian and Iraqi nations as strong, saying that they are united in terms of culture and beliefs and no power can separate the unified Ummah.

Noting that millions of Iranians travel to Iraq, especially Karbala and Najaf, for pilgrimage each year and vice versa, he said that pilgrimage on holy shrine of Imam Hossein (AS) and his companions, particularly Hazrat Abulfazl (AS) is a long-standing wish for the Iranians, especially Shias.

“We hear voice of freedom and smell odor of freedom from the land of Karbala, as it is the land of Jihad, martyrdom, sacrifice and loyalty,” he told a gathering of heads of Iraqi tribes and religious leaders in Karbala.

Iraqi tribesmen and people are good hosts for pilgrims of the holy shrines, Rouhani said, noting that they guide the Iranian pilgrims very well, especially during the ceremony marking 40 days since Imam Hossein’s (AS) martyrdom in Karbala.

“I am very happy to see that unity and brotherhood prevail among the Iranian and Iraqi nations more than any other time,” he said.

The first nation which stood alongside the Iraqi people in the fight against terrorism were Iranians, Rouhani said, adding, “When Mosul was occupied by the Daesh terrorists, I gave a message to the Iraqi government that all our facilities are at your disposal to counter terrorism.”

Expressing pleasure over prevalence of unity in Iraq, he said that unity of Iraq is in the interest of the entire region and the two governments believe in bilateral and regional security.