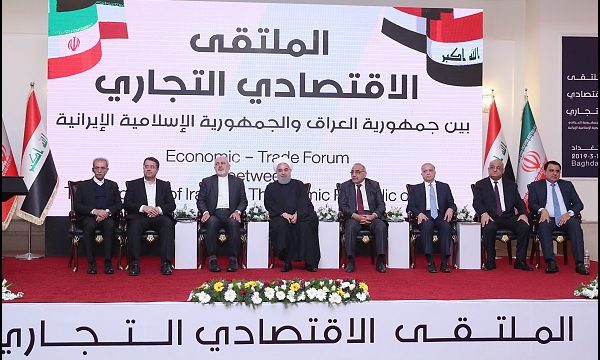 Addressing a joint trade conference by Iran and Iraq in Baghdad on Monday evening, the Iranian president said Iran was ready to develop relations in various sectors, including energy, electricity and gas supplies to Iraq, and link Iran’s railroad network to Iraq.

Arguing that expanding relations between businesspersons and economic activists of the two neighnors would be in favor of their nations, Dr. Rouhani said history, common culture, religious and intellectual affiliation of the two nations, geographical conditions and sharing borders, being neighbors and security of stability, bolstered development of business and economic activities between Iran and Iraq.

He assessed the talks between senior Iranian and Iraqi delegations as positive, adding that great agreements were struck by the two sides, which could set the basis for more activities by businesspersons and economic activists of the two countries.

The Iranian President stated: “Iran is ready to develop relations in various sectors, including energy and supply of electricity and gas needed in Iraq, and linking the railway of Iran to Iraq, which can be a major step in the development of economic and tourism relations between the two countries.”

Stressing that the Islamic Republic of Iran is determined to expand trade and economic relations with Iraq and jack up the volume of their trade from currently $12 billion to $20 billion, Rouhani said, “Facilitating banking relationships and implementing agreements could provide a historic opportunity for both governments, nations and economic activists.”