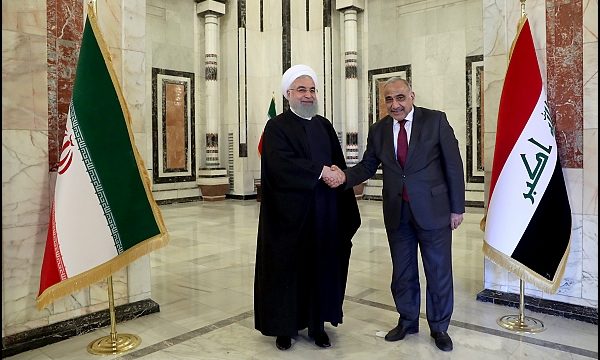 Asharq Al-awsat | Hamza Mustafa: The Iranian president’s visit to Iraq was concluded with the signing of a joint statement expressing the deep-rooted relations shared between his country and Baghdad. Interestingly, the statement praised Iraq for helping offset renewed US economic sanctions on Iran.

As for the Iranian clause, it reiterated Tehran’s unwavering support for the political process in Iraq, saying it embodies not only the people of Iraq and national sovereignty but also territorial integrity and the fight against terrorism.

The joint statement stressed that the two sides have held important discussions in a friendly and conducive atmosphere and voiced their desire to develop political, security, economic, health, trade, cultural, scientific, and technical ties. According to the statement, one of the issues agreed upon between the two countries is “consolidating regional security,” noting that it remains a task to be accomplished by the region’s peoples.

Iran and Iraq had also signed MoUs that covered fields of oil, trade, health, transport as well as issuing visas and other facilities for businessmen and investors, said a statement from the media office of Iraqi Prime Minister Adel Abdul Mahdi.

On transport, railways will be established between Iraq’s southern city of Basra and the Shalamjah border crossing with Iran, according to the statement.

When tackling the 1975 Algiers, both countries decided to clean the Shatt al-Arab basin in order to restore the main navigation channel.

The 1975 Algiers Agreement (commonly known as the Algiers Accord, sometimes as the Algiers Declaration) was an agreement between Iran and Iraq to settle their border disputes and conflicts (such as the Shatt al-Arab, known as Arvand Rud in Iran), and it served as basis for the bilateral treaties signed in 1975 under Saddam Hussein’s rule.

A political science professor at the University of Baghdad, Khalid Abdelilah, said that broaching the Algiers Accord to the MoUs was designed to signal good intentions–especially that Iran has a lot to make from warmer relations with Iraq now that the US revamped harsh economic sanctions.

“It is important to emphasize that what was signed between Iraq and Iran were MoUs, not agreements—otherwise, parliamentary approval is required,” Abdelilah said.

“The problem with Shatt al-Arab lies in the fact that it gives Iran land at the expense of Iraq, which leaves Iraq in a state of constant concern in this area,” he concluded.