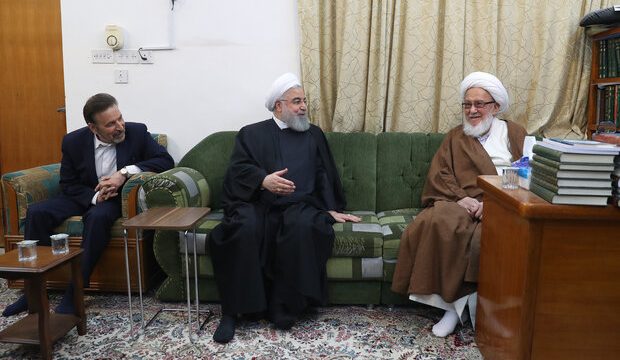 MNA – President of the Islamic Republic of Iran met with Grand Ayatollah Muhammad Is’haq al-Fayadh, one of the senior Shia marja at Najaf Seminary.

In the meeting that took place on Wednesday, Grand Ayatollah Fayadh wished Muslims and the Iranian nation success and said that the Iranian government is based on Imam Ali’s (PBUH) government.

He added “the Islamic Republic of Iran is the forerunner of Shai state and the entire Shias of the world eye Iran.”

During the same meeting, President Hassan Rouhani referred to his meetings with Iraqi officials and said “we discussed topics of interest to both countries and made good decisions”.

The President also stressed that all governments know that the Islamic Republic of Iran supports the rights of all Muslims, especially Shias.

Heading a large high-ranking political-economic delegation, President Rouhani arrived in Baghdad on Monday for a three-day state visit, which will end later today. Strengthening bilateral economic relations is announced to be atop agenda of the president’s trip.