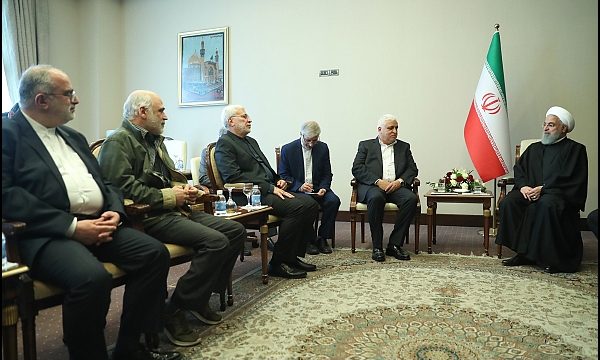 President.ir – President of the Islamic Republic of Iran stated that today, the Iranian and Iraqi governments are determined to develop all-inclusive relations between the two countries, and stressed that all authorities should work in this regard.

Speaking in a meeting with Advisor of the National Security Council and Chairman of the Popular Mobilization Forces (PMF) of Iraq Falih Alfayyadh on Tuesday, Dr Hassan Rouhani said, “Fighting terrorists in Iraq has been achieved through the Iraqi people’s self-sacrifice and is a great honour for Muslims and the World of Islam”.

He also described the presence and fatwas of great ulama in Iran and Iraq in the fight against terrorism and colonialism beneficial for the peoples of the region and said, “The Popular Mobilization Forces have had, and will have, a very important role in consolidating stability, culture and solidarity in Iraq”.

The President went on to refer to the millions of Iranian pilgrims visiting Iraq as the best symbol of great respect for the progeny of the Prophet and expressed hope that the two countries’ goals would be achieved.

Advisor of the National Security Council and Chairman of the Popular Mobilization Forces (PMF) of Iraq Falih Alfayyadh said in the meeting, “Development of relations between Iran and Iraq lays the ground for great developments in the region”.