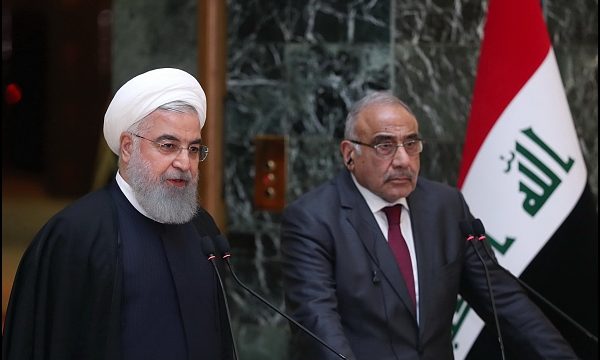 Addressing a meeting with President Rouhani, Abdul-Mahdi said no two countries in world have such common and ancient histories like Iran and Iraq.

He further urged Tehran and Baghdad not to restrain themselves to the current level of relations.

Iraqi Prime Minister called for attempts to develop relations in all fields.

Referring to positive and fruitful talks between Iranian and Iraqi officials, Abdul-Mahdi said various agreements have been signed in industrial, visa, transportation, railway and health fields.

Earlier, Minister of Industry, Mines and Trade Reza Rahmani said 22 industrial and trade agreements were signed by the two countries.

Both countries understand each others’ conditions, he said, adding that Iran and Iraq are aware of the proper ways to maintain cooperation.

Elsewhere in his remarks, he referred to Iraq victory against ISIS terrorists, saying Iran played great role in confronting this dangerous enemy.

Iran has never left Iraq alone and has a big share in defeating ISIS, he reiterated.

He underlined the fact that both countries will continue cooperation to reinforce security, peace and welfare.

Tehran and Baghdad are determined to reinforce regional and international cooperation to maintain peace and security, Abdul-Mahdi said.

His visit to Iraq is taking place upon the official invitation of his counterpart President Barham Salih and also Prime Minister Adil Abdul-Mahdi.

During his three-day stay in Iraq, President Rouhani is also to confer with the senior Iraqi cleric, Ayatollah Seyyed Ali Sistani.

Iran’s Foreign Minister Mohammad Javad Zarif travelled to Iraq on Saturday to do the necessary arrangements for President Rouhani’s official visit to the neighboring state.