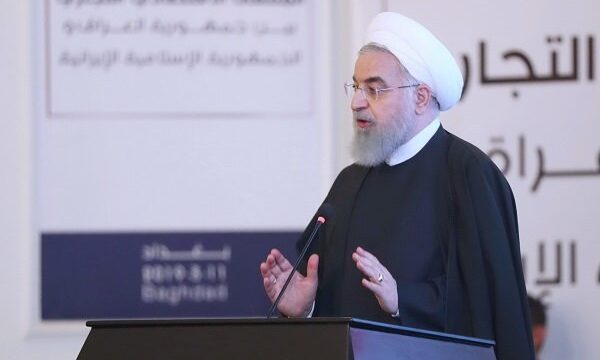 MNA – Speaking at the Economic-Trade Forum of Iran and Iraq late on Monday, President Rouhani voiced Iran’s determination to increase trade relations with Iraq to $20 billion from the current $12 billion.

“The two Iranian and Iraqi nations have always been together in recent years in creating security and stability,” the official website of Iranian Presidency quoted him as saying, adding, “the Iranian nation and government are very happy that they have been alongside the Iraqi nation and army from the beginning in their fight against terrorism.”

Referring to the achievements of stability and security in Iraq, Rouhani said, “Iranian economic and trade executives have stood by the Iraqi nation even when the country was insecure.”

He described the meeting of the high-ranking delegations of Iran and Iraq positive and said, “today, good agreements were made by the two countries.”

“We are ready to have our tradespeople more active in Iraq and supply the required goods so that we can reach a good balance,” he said.

“It was also decided that visas still remain in place, but the fees were decided to be removed and visas be issued free of charge.”

Rouhani also said that “Iran is ready to develop relations in different fields such as energy, and supplying power and gas to Iraq.”

Stressing that Iran is determined to increase trade relations between the two countries to $20 billion from $12 billion, he said, “facilitating banking relations can create a historic opportunity for the two nations.”

Heading a high-ranking politico-economic delegation, Rouhani embarked on an official three-day visit to Iraq on Monday. This the first official visit of Rouhani to the neighboring country during his tenure.