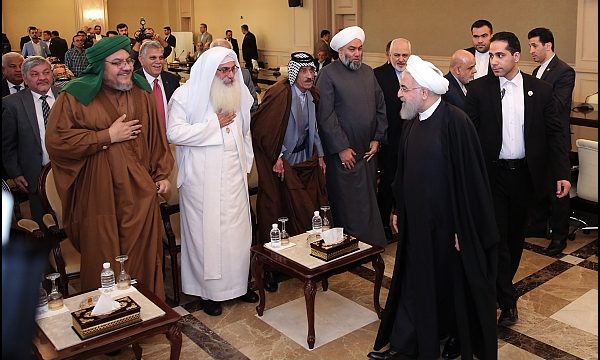 President.ir – President appreciated the warm hospitality of the Iraqi government and nation, especially towards Arba’een pilgrims, saying, “In our intensive meetings with the Iraqi officials, we discussed all issued of interest to the two countries with goodwill”.

Addressing the Iraqi elites on Monday, President Hassan Rouhani said, “The negotiations were on all topics important to the two governments in bilateral, regional and international fields, and we reached good agreements”.

He said, “In combatting ISIS, the Islamic Republic of Iran stood by the people of Iraq”.

“Sowing discord among the countries and people of the region, creating rifts among the ethnic and religious groups, justifying their illegitimate presence in the region, destroying Iraq and Syria and other countries in the region and finally, introducing themselves as the saviour and portraying a violent face for Islam were among the goals of the hegemonic powers,” added the President.

“The Muslims of the region could tell the wold that these terrorists are not real Muslims and, despite anti-Islamic propaganda, Islam is the religion of justice, mercy and peaceful coexistence with all ethnic and religious groups,” he said.

The President also said that the peoples of the region showed it to the world that imperialism is the main sponsor of terrorists.

He continued, “It was crystal clear where the terrorists were being sponsored, and how and where they were selling oil and plundering relics”.

Dr Rouhani went on to say, “We did not let hegemonic powers to introduce themselves as the saviour of the region, and today, everyone knows that these western powers did not have any role in the elimination of terrorists from the region”.

“Nobody in the world doubts that the people of Iraq were the ultimate victor of this war, and the terrorists had nothing to do with Islam, the Prophet, and his progeny,” he said.

The President also said, “Of course, terrorism has not finished yet, and it is possible that they make different problems for the peoples of the region, because the Americans are transferring them to Afghanistan, the Central Asia and Caucasus”.

He added, “We need a great unity and coalition for creating a major power in the region so that when the superpowers think about this region, the first things that comes to their mind is the unity and civilisation of this region, rather than oil and plundering”.

Describing relations between Iran and Iraq exceptional in the region and the world, Dr Rouhani said, “Millions of Iranians and Iraqis coming and going means that they have historical and cultural interest in each other”.

“We want to build a great power in the region through unity, not against another country, but rather attract other friendly countries in the region, increasing it to three, four and five powers alongside each other,” said the President.

Dr Rouhani continued, “In this visit, we decided to develop our economic, cultural, scientific and political relations day by day”.

Stating that an integrated, united Iraq is beneficial for the country, the region and Iran, he said, “Unity among the Iraqi nation is very important and we know that if ethnic and religious groups are not united in a society, they cannot show their true power in dealing with enemies”.