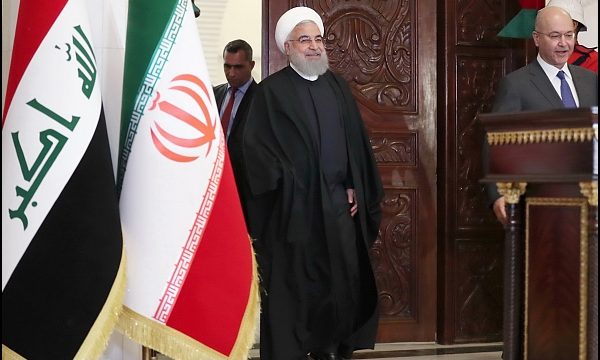 Press TV – Iranian President Hassan Rouhani is in Baghdad on a trip aimed at solidifying strategic ties despite US efforts to keep the two neighbors apart and curb Iran’s influence in the region.

He met with his Iraqi counterpart Barham Salih shortly after arrival on Monday for important talks which the Iranian president described as “very good.”

“Strengthening ties between Tehran and Baghdad works to the benefit of both countries and we won’t let this positive path towards progress slow down to a halt,” Rouhani said at a joint news conference.

Salih described the trip as “very important” and said the two sides had agreed on new frameworks for cooperation which would be unveiled later in the day.

“We need to get past trivial details in mutual relations and think about the bigger and broader space for cooperation and ties because this would best serve the interests of both countries,” he added.

The Iranian president also thanked Iraq for hosting millions of Iranians who pour into the neighboring country every year to mark the occasion of Arba’een, which is the 40th day after the martyrdom anniversary of Imam Hussein (AS).

The trip, described as “historic and noble” by Iranian Foreign Minister Mohammad Javad Zarif, has been viewed by experts as Iran’s response to US President Donald Trump’s snap trip to Iraq in December.

Trump slipped into Iraq on Christmas and spent most of his short visit outlining how he wanted to keep US troops in the Arab country in order to “watch” Iran with which Iraq shares a 1,400-kilometer-long border.

The unannounced visit drew fire from Iraqi officials and regional leaders, including President Rouhani, who said the secret visit – as if to a US state – undermined Baghdad’s sovereignty.

Unlike Trump, who had to land in a military base in the dark of the night with no Iraqi officials on hand to welcome him, Rouhani touched down in Baghdad in broad daylight and was received by high-ranking authorities.

Reacting to Trump’s secret visit then, Rouhani asserted that flying into Iraq under the cover of darkness meant “defeat” for the US in Iraq and asked the US president why he did not opt for an “open and official visit” instead.

The Iranian president told reporters in Tehran before departure on Monday that ties between Iran and Iraq were nothing like the relations between Baghdad and the “occupying” American forces.

“The US is despised in the region; the bombs they dropped on the people of Iraq, Syria and other countries are not forgettable and at the same time, Iran’s brotherhood towards countries of the region will always be remembered,” he said.

The trip comes on the heels of the Daesh terror group’s defeat in Syria and Iraq, an achievement that is widely believed to have been impossible without Iran’s critical role in providing advisory assistance to both governments.

Iran and Iraq enjoy “strategic” relations that cannot be weakened by any country, Zarif said in Baghdad Sunday, noting that the two countries’ youths fought side by side against Daesh.

“We consider this trip a new start in our relations with Iraq,” Zarif said, describing Iran and Iraq as a beating heart of the region. “Without Iran and Iraq, the region won’t be safe and stable,” he added.

Rouhani said last week that without Iran’s support “Baghdad and the Kurdistan region would have definitely fallen and Daesh would have dominated the region.”

Many observers have described the trip as a milestone in Iran-Iraq ties and a humiliating defeat for the US-led campaign to alienate the two neighbors.

What the campaign’s main supporters have seemingly failed to account for in their dealings is the unshakable bond that the Iranian nation has developed with its neighbors, with whom it shares thousands of years of history.

President Salih best portrayed Baghdad’s disregard for such attempts, saying on Sunday that Iraq won’t join the American push against Iran even though it knows the stance will harm Baghdad’s own interests.

“Iraq insists that the interests of our friendly and neighboring country must be met. We will do our best to reduce tensions in this regard and decrease the damage that will be done to the Iranian nation,” added Salih.

The Iranian president is slated to meet with Parliament Speaker Mohammed al-Halbusi and a number of prominent lawmakers.

He will also make stops at Shia holy sites and meet top Iraqi Shia cleric Grand Ayatollah Ali al-Sistani who is a major source of influence in the Arab country.

Diplomatic trips between the two countries have been on the rise as of late, signaling a strong resolve to expand the existing ties. Rouhani’s trip comes months after Salih visited Tehran in November.

Rouhani told reporters on Monday morning that the trip was aimed at enhancing security cooperation while also focusing on trade, roads and environment to broaden the close relationship.

Iran is currently Iraq’s top trade partner, with an annual turnover of about $13 billion, which they hope to increase to $20 billion.

By comparison, annual trade between Saudi Arabia and Iraq stands below $6 billion.