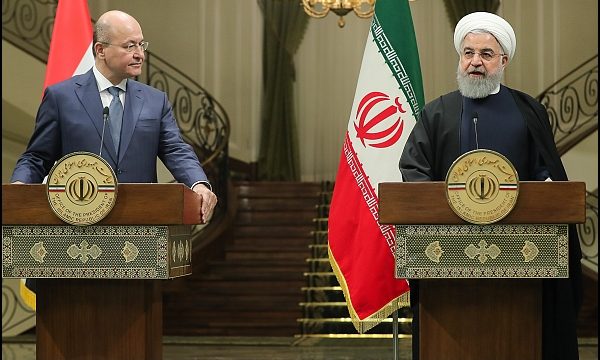 He met with a number of Iranian journalists in the Iraqi Presidential Palace on Sunday on the eve of his Iranian counterpart’s visit to Baghdad, IRNA reported.

In his vigorous address, which lasted about 50 minutes, the Iraqi President answered a number of questions about bilateral relations, the achievements of his recent visit to Tehran, and his important meeting with Supreme Leader of the Islamic Revolution Ayatollah Seyyed Ali Khamenei, regional ties, especially between neighboring countries and Iraq’s role in mediation between the governments involved in the region, the fight against terrorism, the role of tourism in the relations between Baghdad and Tehran, and the greatness of the Arbaeen ritual.

The process of visa waiver between the two countries, the importance of Iraq’s relations with Syria, and the protection of the legitimate government of Bashar al-Assad, Baghdad’s decisive stance in support of Palestinian people’s struggles were among other topics addressed in the conference.

At the beginning of the visit, Salih addressed the audience in Persian, ‘I fully understand Persian, but I cannot speak Persian very well.”

During this meeting, he repeatedly complained to his interpreter, ‘I deliberately used certain terms that you did not translate accurately.”

“First and foremost, this trip is to deepen the relations between the two countries and the two nations. I was in Tehran about three months ago, where President Rouhani and Supreme Leader and other officials of the Islamic Republic welcomed me, and we had long and detailed talks on the situation in Iraq and the relations between Iran and Iraq and the situation in the region,’ the high-ranking official reiterated.