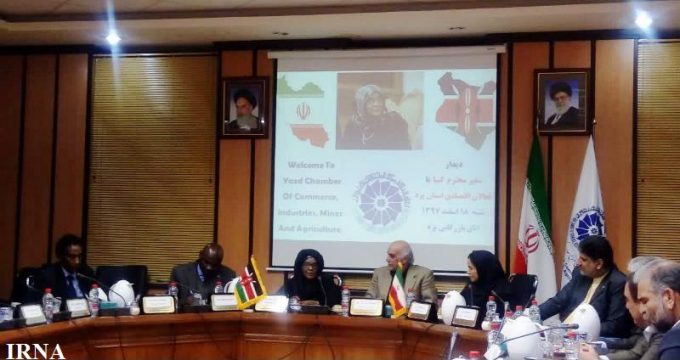 Kenya firm to keep ties with Iran in defiance of US pressures: Envoy

IRNA – Kenya is determined to continue trade and friendly relations with Iran despite the US sanctions, the Kenyan envoy to Iran said.

‘Kenya’s [diplomatic] mission have been in Iran since 33 years ago, but relations between the two countries dates back to many years ago,’ Ruqayyah Ahmed Subu said at a meeting with businesspersons in Iran’s central Province of Yazd.

She referred to a number of families from Iranian provinces of Fars and Sistan-Baluchestan residing in Kenya as an evidence of the longstanding relations between the two countries.

‘That’s why the sanctions have not affected the friendly ties between the two countries,’ she noted.

The ambassador emphasized that the east African country would embrace any trade exchange with Iranian businesspeople.

Iran and Kenya have a long history of cooperation especially in economic areas.

Iran exported some $138 million worth of goods to Kenya (ended March 20, 2018) last year which is indicative of rather good economic exchanges between the two countries, Iran’s ambassador to Kenya Hadi Farajvand said on Saturday.

According to the Iranian ambassador to Nairobi, Iran has exported $79 million of goods to Kenya in the current year.

One good area of economic cooperation existing between the two countries is the mines sector as Kenya has non-excavated mines and therefore welcomes foreign experts and companies to work in this field.