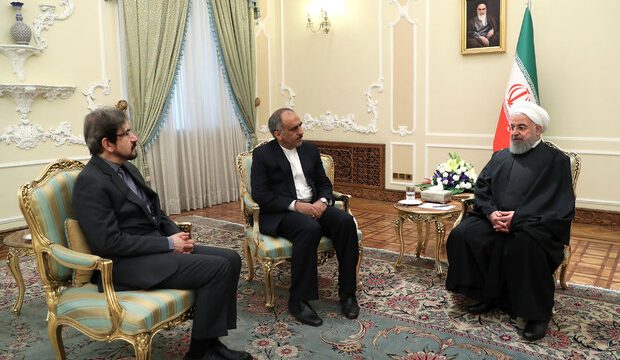 Iranian amb. to France meets with Pres. Rouhani before leaving on mission

MNA – Newly-appointed ambassador to France, Bahram Ghasemi, as well as ambassador to Tajikistan, met with President Hassan Rouhani before leaving Iran to start their diplomatic missions in the designated countries.

During the meeting, President Rouhani wished them success in carrying out their responsibilities, and called on the ambassadors to introduce Iran’s capabilities and potentials to the private sector and investors of the country of their mission.

For their parts, the ambassador to France, Bahram Ghasemi, and ambassador to Tajikistan, Mohammad Taghi Saberi, presented Rouhani with a report on the status of Iran’s relations with the countries of their mission, and highlighted their determination and seriousness in expansion of all-out cooperation and economic ties between Iran and other countries.

Bahram Ghasemi, former spokesperson for the Ministry of Foreign Affairs, was appointed as the ambassador to France on Friday after months of diplomatic tensions between the two sides.

Meanwhile, France has appointed Philippe Thiebaud, a former envoy to Pakistan, as the ambassador to the Islamic Republic of Iran.

The new ambassadors will fill posts that have been vacant for more than six months. The previous ambassadors left their missions last summer.