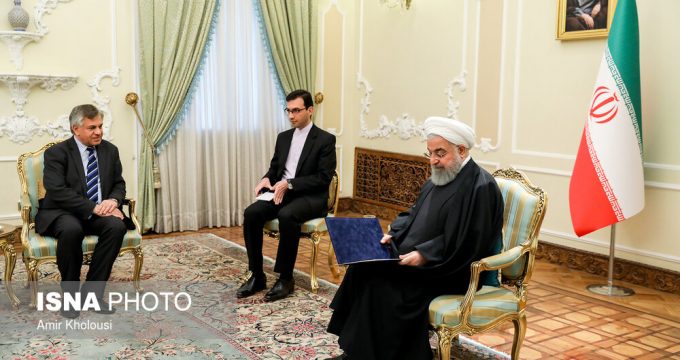 President.ir – President described relations between Iran and Iraq exceptional and a model for relations in the region, expressing hope that the model of relations could be used by the entire region.

Speaking with the new Ambassador of Iraq to Tehran on Saturday while receiving his letter of credence, Dr Hassan Rouhani stated that there are ample potentials for further development of relations between Tehran and Baghdad.

Stating that the interest of the people of both countries in each other is an asset for the development and deepening of relations, and said, “The Islamic Republic of Iran has been, and will be, alongside the people and government of Iraq in all sad and happy events”.

He also went on to refer to his coming visit to Iraq and expressed hope that good agreements be reached for further cementing of relations.

The new Ambassador of Iraq to Tehran Abdul-Rahman Saad Jawad Qandeel also presented his letter of credence to President Rouhani and said, “Iran is one of the very important countries to Iraq and we are working hard to further develop Tehran-Baghdad relations”.

“In Iraq, everything is ready for the Iranian President’s visit to Baghdad, and we hope that this visit’s agreements serve as an important step for deepening of ties,” he said.