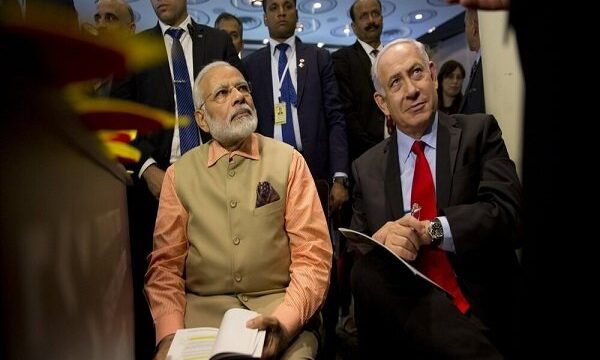 While news about the airstrike and subsequent retaliation by Pakistan hogged headlines across the world, pushing the two countries to the brink of full-fledged war, there was something remarkable it.

According to news reports, India used Israeli-made bombs in the airstrike what New Delhi claimed was targeted at militant sanctuaries in Pakistan-held territory.

Fighter jets armed with Israeli-made Spice 2000 smart missiles attacked the militant sanctuaries. Each missile weighed 1,000 kilograms and operated on pre-fed GPS coordinates. They were fitted with technology making them difficult to be jammed or deflected, the reports said.

The relations between Narendra Modi-led nationalist government in India and Benjamin Netanyahu-led Zionist regime in Israel have grown rapidly in recent years, much to the chagrin of peaceniks in India.

Writing in The Independent, veteran Middle East watcher Robert Fisk said Israel has been for months lining itself up alongside India’s BJP government “in an unspoken — and politically dangerous — ‘anti-Islamist’ coalition, an unofficial, unacknowledged alliance, while India itself has now become the largest weapons market for the Israeli arms trade.”

“Not by chance, therefore, has the Indian press just trumpeted the fact that Israeli-made Rafael Spice-2000 “smart bombs” were used by the Indian air force in its strike against Jaish-e-Mohammad (JeM) “terrorists” inside Pakistan,” Fisk wrote.

In 2017, India happened to be Israel’s largest arms client, shelling out £530 million for Israeli air defense, radar systems and ammunition, including air-to-ground missiles, which Fisk noted have been used during Israel’s military campaigns against Palestinians and in Syria.

“Several Indian commentators, however, have warned that rightwing Zionism and rightwing nationalism under Modi should not become the foundation stone of the relationship between the two countries, both of which — in rather different ways — fought the British empire,” wrote Fisk.

Khinvraj Jangid, Professor at OP Jindal Global University in New Delhi, in one of his articles remarked that Israel is another entity with which “Modi feels a kindred spirit in terms of how to act out being ‘strong’.”

Adding fuel to the war frenzy, many writers in India and Israel have been calling for closer cooperation between India and Israel, which actually means more wars and destabilization of the region.

“As India mourns its dead and considers its response to this outrage, it behooves Israel to stand with its Indian allies and do all it can to turn up international and diplomatic pressure on the Pakistani regime,” wrote Michael Fruend in Jerusalem Post.

Writing in Economic Times, commentator R Sriram said Israel has often been held up as a case study for ‘anti-terror operations’.

While acknowledging that the Israeli military, intelligence apparatus and broader security establishment “have used every tool in the book over the past 71 years to counter, harass and intimidate their adversaries and gain the upper hand”, he said the government in New Delhi “could learn much from Israel”, obliquely calling for Israel-like operations by India against Pakistan.

The newly-appointed Israeli envoy to India, Ron Malka also found the time ripe to jump the bandwagon, asserting that “there is no limit” to Israel’s assistance to India in defending itself from terrorism.

“Whatever India needs to defend itself there is no limit. We are here to help our close friend India to defend itself especially against terrorism because terrorism is the problem of the world and not only of India and Israel,” he was quoted as saying by India’s state-run news agency PTI last.

Achin Vanaik, Indian academic and activist, said the argument of India “responding like Israel” essentially implied that India should also use ‘state terror’ like Israel has been doing in Palestine.

In its report, India’s leading think tank Observer Research Foundation (ORF) commenting on the growing Indo-Israel ties said Modi was the first Indian prime minister to embark on an official visit to Israel in July 2017. Another important development, it noted, was Modi abstaining from voting against Israel in the United Nations in several resolutions.

While the India-Israel bonhomie is on full display, Pakistan has also dropped hints suggesting that it seeks to improve ties with Israel, a departure from its stated policy.

Last week, Pakistan’s foreign minister Shah Mehmood Qureshi stirred hornet’s nest in Pakistan by saying in an interview to an Israeli news portal that Pakistan wants to improve ties with Tel Aviv but it depends on situation in the region.

Former Pakistan President Parvez Musharraf, who has in the past met with Israeli leaders, addressing a press conference in Dubai this week hinted at making relations with Israel to counter India.

It is pretty clear that Israel has a significant role to play in sparking tensions between India and Pakistan and provoking them against each other to boost its defense trade and to destabilize the situation, Muneeb Mir, an Islamabad-based analyst, told Tehran Times.