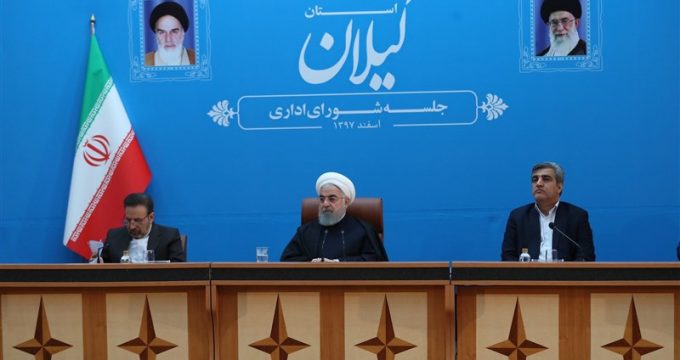 President: Iran not afraid of talks, but US must return to JCPOA first

Tasnim – Iranian President Hassan Rouhani said Tehran is not afraid of negotiations but stressed that the US must first return to the 2015 nuclear deal and make up for the past in order for any negotiation to take place.

In an address at a meeting of provincial officials in the northern city of Rasht on Thursday, Rouhani said the US officials have made several requests for negotiations with Iran.

The president said Americans have even asked five leaders of other countries in the past year to work as mediators to convince Iran to enter talks with Washington, adding that he has made it clear that conditions and time are not appropriate for such talks and meetings.

The US must first return to the Joint Comprehensive Plan of Action (JCPOA) and make up for its withdrawal from the nuclear agreement before any plan for talks with Iran, Rouhani stressed.

Iran favors negotiation and is very skillful in it, the president added. “Our logic and reasoning is strong and reliable, to the extent that we won (cases) in the face of the US in international courts, so we are not afraid of the negotiating table, legal disputes and wars.”

“I would certainly meet with Iran if they wanted to meet,” Trump said on July 30, 2018. “I do believe that they will probably end up wanting to meet. I’m ready to meet whenever they want to.”

In May 2018, Trump pulled his country out of the JCPOA, which was achieved in 2015 after years of negotiations among Iran and the Group 5+1 (Russia, China, the US, Britain, France and Germany).