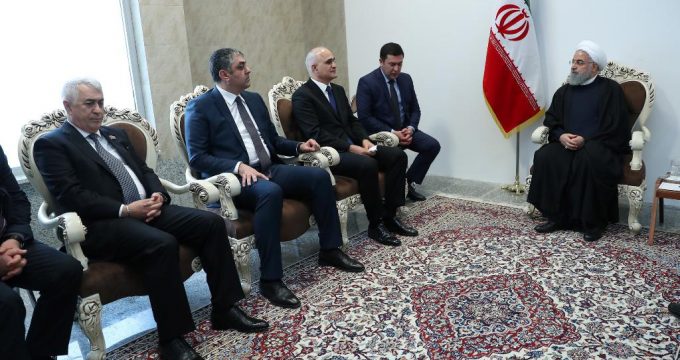 IRNA – Iranian president stressed ties between Tehran and Baku are in direction of the desire of the two nations, and noted the completion of the South-North Rail project is of valuable national and regional cooperation.

President Hassan Rouhani made the remarks Wednesday evening on the sidelines of the Qazvin-Rasht railway opening ceremony and during the meeting with Shahin Mustafayev, the Minister of Economy of the Republic of Azerbaijan.

He stated that Tehran-Baku cooperation in various fields, especially in the current Iranian government, is more advanced than before.”

The president called the relations between the Islamic Republic of Iran and the Republic of Azerbaijan fraternal and in line with the desire of the two nations to deepen and develop.

He emphasized that the will of the Government of the Islamic Republic of Iran is to strengthen and expand cooperation with the Republic of Azerbaijan as a neighbor, friend and brother.

Referring to the importance of expanding cooperation between Iran and Azerbaijan in the fields of transportation, energy, automotive and pharmacy, the Iranian president said, ‘Economic cooperation and joint investment will serve the history and the two nations.’

“Thanks to the support of Azerbaijani President Ilham Aliyev for further development of the relations between Tehran and Baku”, Rouhani said while expressng the hope that the world will witness the fast implementation of agreements in the Joint Commission with more plans.