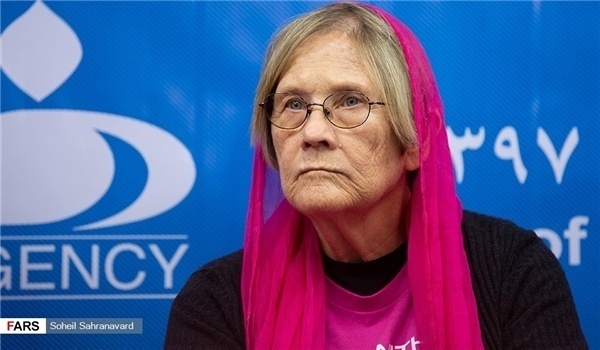 Retired US Army colonel: US military wary of war against Iran

FNA – A prominent American anti-war activist and a member of Codepink peace group underlined that the US army commanders are aware of Iran’s high military power and fear starting war against the country.

Mary Ann Wright, a retired United States Army colonel and retired US State Department official, known for her outspoken opposition to the Iraq war, said that the US military knows how strong the Iranian military is and may not attack a country with a strong military.

“I personally plead my government not to involve in any war against Iran,” she said, addressing a press conference at the FNA College of Journalism in Tehran on Tuesday.

Wright also blasted the US government for launching an economic war against Iran, saying, “Considering the humanitarian issues, it is wrong for a nation (the US) to limit another country’s access to medicine, medical equipment, computer and other technologies.”

She described the US sanctions against Iran as “violation of international laws”.

Wright added that when the Codepink delegation returns to the US, its members will go to the congresspersons and write articles in the media to clear the realities in Iran.

She voiced regret that the American media would attack Codepink for not supporting Trump’s policies, adding that the anti-war activists are determined to inform the US people and congresspersons about Iran and its people.

After the meeting, Co-founder of Codepink Medea Benjamin criticized Donald Trump for “ramping up confrontation with Iran”.

Also last Wednesday, the US anti-war activists participated in a press conference at Tehran’s Milad Tower where they criticized the US administration for abandoning the multilateral 2015 nuclear deal and re-imposing bans on Iran, saying such a move is the outcome of extensive lobbying by the Israeli and Saudi regimes, America’s staunchest allies in the Middle-East.

Trump unilaterally pulled the US out of the nuclear accord, officially named the Joint Comprehensive Plan of Action (JCPOA), and unleashed the “toughest ever” sanctions against Iran.