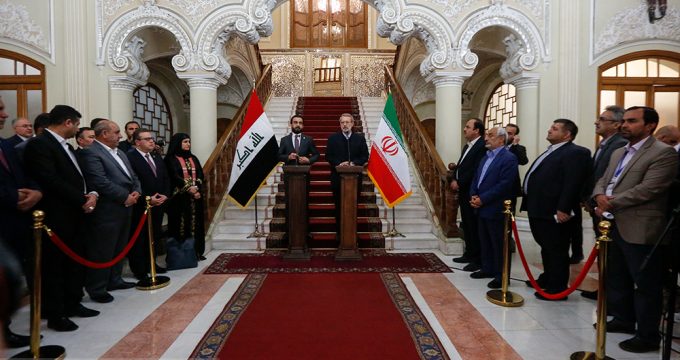 Press TV – Iran’s Parliament Speaker Ali Larijani has expressed satisfaction with the current security situation in neighboring Iraq, which managed to defeat the Takfiri terror group of Daesh in late 2017 with the help of Tehran.

Larijani made the remarks at a joint press conference with Iraqi Parliament Speaker Mohamed al-Halbousi in Tehran on Wednesday.

Larijani further hailed the security situation in post-Daesh Iraq and said, “We are happy that Iraq is today enjoying good security following the tensions caused by terrorist currents in Iraq.”

Daesh unleashed a campaign of death and destruction in Iraq in 2014, overrunning vast swathes of land in lightning attacks.

Shortly after the beginning of the terror campaign in Iraq, Ayatollah Sistani issued a fatwa calling on all Iraqi citizens to defend their country. Iraq finally declared the end of the anti-Daesh campaign in December 2017.

At Baghdad’s request, Iran also provided military advisory assistance to Iraq in the course of its anti-Daesh operations.

Elsewhere in his remarks, Larijani said that he had held talks with Halbousi on developing Tehran-Baghdad economic and parliamentary ties as well as on ways to establish sustainable security in the broader region.

Halbousi, for his part, stressed that Iraq would not allow its soil be used for any aggression against neighboring states.

He further noted that the Daesh terror group could not have been defeated without the help of Baghdad’s friends, including Iran.

The Iraqi official’s trip comes ahead of an official visit by Iranian President Hassan Rouhani to Iraq later this month.