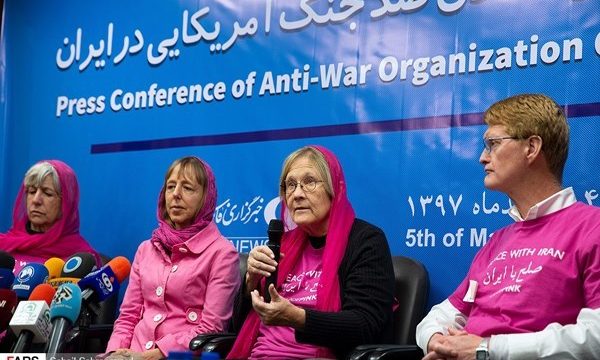 FNA – The co-founder of Pinkcode, an anti-war NGO based in the US, blasted members of the Congress for supporting the anti-Iran Mojahedin-e Khalq Organization (MKO, also known as the MEK, PMOI and NCRI) terrorist group.

Speaking at a press conference at FNA College of Journalism in Tehran on Tuesday, Medea Benjamin, the co-founder of Codepink: Women for Peace, voiced concern about the relashionship between the US congresspersons and the terrorist groups like the MKO.

She underlined that the American people are tired of new wars and conflicts as well as the propaganda launched by the US media and officials against Iran, adding that they are more suspicious of Saudi Arabia’s activities, specially in Yemen, and after the brutal killing of prominent journalist Jamal Khashoggi.

“The American people are also tired of the US government’s unconditional support for Israel,” Benjamin said.

Asked by journalists if they will be troubled when returning from Iran to the US, she said, “We do not know if we will have problem. But when we go back, some of us may undergo questioning.”

Benjamin noted the hospitality of the Iranian people during the visit to Tehran and other Iranian cities and voiced concern over Washington’s inhumane sanctions on Iranian citizens.

The delegation said they have traveled to Tehran to stress the difference in the stances between the American government and people, reiterating that the American people are against their country’s sanctions on Iran.

Banjamin said that the travel ban against the Iranians, the US unilateral sanctions against Iran and the difficulties created for the Iranian people in their access to medicine and different technological goods by the embargoes have upset the Codepink members and many American people.

She said that after returning to the US, the anti-war group will push the US congresspersons and presidential candidates to make efforts to rejoin the 2015 nuclear deal with Iran, adding that the American people want to leave in peace with the world community.

After the meeting, Benjamin criticized Donald Trump for “ramping up confrontation with Iran”.

Also last Wednesday, the US anti-war activists participated in a press conference at Tehran’s Milad Tower where they criticized the US administration for abandoning the multilateral 2015 nuclear deal and re-imposing bans on Iran, saying such a move is the outcome of extensive lobbying by the Israeli and Saudi regimes, America’s staunchest allies in the Middle-East.

Trump unilaterally pulled the US out of the nuclear accord, officially named the Joint Comprehensive Plan of Action (JCPOA), and unleashed the “toughest ever” sanctions against Iran.

Documents had shown last year that US National Security Adviser John Bolton received $40,000 to participate and address the audience in a gathering of the MKO terrorist group in Paris in July 2017.