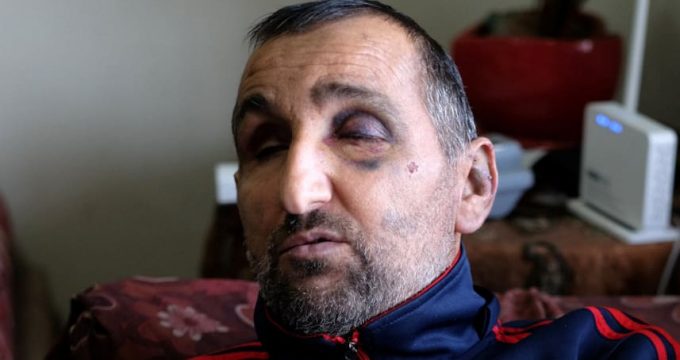 Without saying a word, Israeli troops beat up a blind man in his bed

Haaretz – Israeli soldiers invaded the home of a Palestinian family at night, and battered a man in the face in front of his wife and children. He’s 47, blind and on dialysis, and his toes have been amputated because of diabetes.

He’s lying on the living room sofa, next to the gas stove, trying to warm his broken body. When we visited him this week, he had just returned from the hospital and was worn out from the dialysis treatment he has been undergoing three times a week for the 11 years since his kidneys stopped functioning, as a consequence of severe diabetes.

Before that, 15 years ago, he started to lose his sight, and for the past few years he has been completely blind. Also, over the course of the last six years, he has gradually had to have toes amputated, operation after operation. His face is sallow from the dialysis.

Physically shattered, he lies there, barely able to move. He needs help getting up; he’s incapable of doing anything on his own. Every few months, he travels to Jordan for the catheterization of the blood vessels in his legs, which are becoming blocked.

So yes, Munzer Mizhar, 47, is a very sick man. Still, last week, that didn’t stop Israeli soldiers from pummeling him mercilessly, even after the neighbors had warned them that he was sick. Nor was his wife, an eyewitness to the attack, able to prevent the abuse of her husband despite her shouts that he was blind, too.

Nothing helped. The fists landed on his face – the blue marks are still visible, particularly below his dead eyes, now blood-red. He also has wounds on his shoulders and both hands – from his attempts to ward off the brutal assault.

It all happened while he was in his bed after 4 A.M. on February 20.

A medical technician, Mizhar was employed in a laboratory belonging to the Palestinian Authority but had to take early retirement because of his deteriorating health. He speaks good English. He and his wife Iman have four sons, the oldest 18 and triplets of 16. Iman, who is 45, has cancer, for which she’s treated at Augusta Victoria Hospital in East Jerusalem, and in Jordan.

Her condition is good. She joined the conversation in their house this week but grew pale as it proceeded and had to lie down several times, eyes closed, tears welling up. The trauma of her husband’s beating is still vivid, painful and hard for her to bear, perhaps even more than for him. Family members say she cowers in fright whenever the horrors of that night are recalled. They live in a well-kept home in the town of Dawha near Bethlehem.

That Wednesday, Munzer was awakened at about 4:45 A.M. by the sound of footsteps in the house. He woke his wife. He thought that maybe his sons were wandering about in the dark.

His wife opened her eyes and screamed. He didn’t understand what was going on. At first they thought burglars had broken in. But Iman saw shadowy figures who had entered their room, while red laser beams sliced through the darkness toward their bed.

The specters moved without sound. Later it would emerge that the troops had silently broken down the door. After an instant, Iman realized that the intruders were soldiers. They were masked, five or six of them in the bedroom, aiming their rifles at the couple. More troops waited outside.

Iman got out of the bed, her hair exposed to the eyes of the men who had invaded her room – a very sensitive matter for them, which Munzer refers to with pain. One soldier approached the bed and without a word punched Munzer in the face. Munzer is convinced that the assailant wore brass knuckles. His face began to bleed, with a lot of blood streaming from his nose, as well as from the wounds on his hands, which ultimately failed to protect his face. He saw nothing, of course.

Iman, standing next to the bed, went on shouting, but the soldiers blocked her from defending her husband. She tried to explain that he was blind and sick, but it was useless. Probably none of the soldiers understood Arabic. The soldier held Munzer’s head with one hand and hit him relentlessly with the other, she says. The others just stood there. The beating went on for at least five minutes.