MNA – Special Assistant to the Speaker of the Iranian Parliament for International Affairs severely criticized the way freedom of speech works in Western societies.

In a Sunday tweet, Hossein Amir-Abdollahian noted that he had posted a photo of Hezbollah leader Hassan Nasrallah on Instagram but the social media platform has removed it

“It is the western model of freedom of speech?” he framed.

“I sent the following Instagram post two days ago with a photo of Sayyed Hassan Nasrallah, Hezbollah Secretary-General and the champion of the fight against terrorism. Instagram removed the post and issued this warning,” he wrote, posting the following photo. 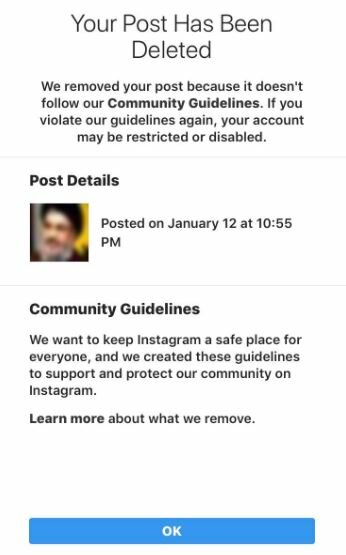 Amir-Abdollahian’s post about Hazbollah came days after UK Home Secretary Sajid Javid said that the British government will designate the entire Hezbollah organization as a terrorist entity as of Friday, subject to the approval of the parliament.

In an earlier tweet on February 28, he wrote, “#Hezbollah is considered as the greatest regional actor in combatting #terrorism. World should appreciate the stabilizing role of #Lebanese Hezbollah. It’s good for the #UK to proscribe some of her terrorist-nurturing allies, rather than Hezbollah.”