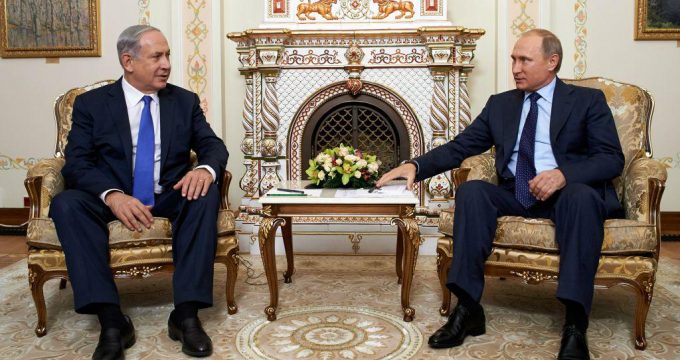 Press TV – The Israeli premier holds talks with Russian President Vladimir Putin in Moscow over Iran’s role in Syria as well as Russia’s supply of the S-300 air-defense systems to Damascus, amid tense bilateral ties over the downing of a Russian military aircraft in Syria blamed on Tel Aviv.

During his Wednesday talks with Putin in Moscow, Netanyahu renewed his call for an end to Iran’s anti-terrorism advisory mission in Syria, threatening that the Tel Aviv regime would continue to take action against what he called Iran-related targets in Syria, Israel’s English-language daily newspaper The Jerusalem Post reported.

“We will do everything that depends on us to prevent what Iran is saying, which is threatening to destroy us, and we will continue to act accordingly,” Netanyahu claimed during the meeting.

Both Iran and Russia have been supporting Syrian President Bashar al-Assad’s government in military operations aimed at purging foreign-backed terrorist groups from the Arab country.

Israel, however, views Iran’s advisors in Syria as a threat and has openly pledged to target them out until they leave the country.

The Israeli air force has staged repeated air raids against Syrian military bases that it claims are used by Iranian military advisors, among other targets.

Tel Aviv has repeatedly asked Moscow to have Iran withdraw its military advisors from regions near the occupied side of Syria.

Russia, however, praises Iran’s crucial role in counter-terrorism efforts in Syria, saying Tehran’s presence in the war-torn country – like that of Moscow — is legal under international law and thus it cannot be forced out.

Netanyahu told reports after Wednesday’s talks that the issue of Russia’s S-300 anti-missile systems in Syria was dealt with at great length and from every possible angle.

Israel has long lobbied Russia not to provide the S-300 to Syria, fearing this would hamper its aerial capability to strike various targets in the Arab country.

Ties between Moscow and Tel Aviv have been tense since Russia’s delivery of the S-300 missile defense system to Syria following September downing of a Russian aircraft during an Israeli airstrike.

The Israeli regime has threatened to hit the Russia-made S-300 missile defense launchers in Syria, even those manned by the Russian military itself, should the launchers target Tel Aviv’s warplanes.

It was Netanyahu’s first trip to Moscow since the plane incident in September.

Netanyahu has traveled to Russia several times in the past in order to mollify Moscow over frequent Israeli airstrikes in Syria under the pretext of confronting Iran and Lebanon’s Hezbollah.

Netanyahu, who had planned originally to return to Israel on Thursday, cut his trip short reportedly to prepare for an expected indictment announcement against him in the coming days.