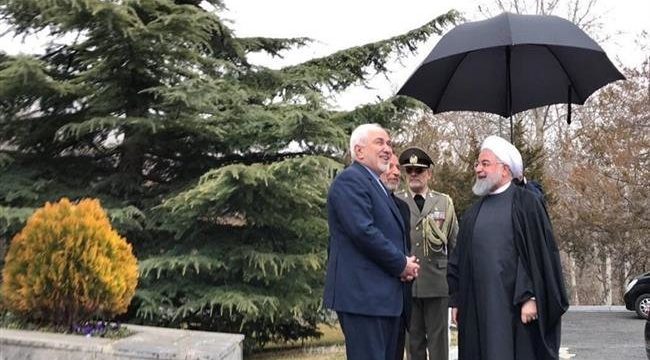 The story of a resignation that wasn’t accepted

February 27, The Iran Project – In an unexpected move, Iran’s Foreign Minister Mohammad Javad Zarif announced his resignation in a post on Instagram late on Monday (Feb. 25), but Pres. Rouhani rejected his resignation, saying it runs contrary to national interests.

Zarif’s surprise resignation sparked major debate in Iran regarding the reasons behind the departure. Zarif had said his resignation was intended to protect the Foreign Ministry’s “integrity.” FM Zarif was not present at recent meetings in Tehran with Syrian President Bashar al-Assad.

Zarif’s absence at meetings with Assad were due to a “lack of administrative coordination,” an unnamed Foreign Ministry source told Entekhab.

But as expected, the news of his resignation has been greeted with a sigh of relief in Tel Aviv and Washington.

The 59-year-old diplomat started serving as the country’s top foreign minister after Rouhani took office in 2013. He was reinstated in the post when Hassan Rouhani won a second term.

The foreign minister’s discourse has notably featured rejection of Iranophobia and strong promotion of international interaction. He played an instrumental role in the negotiations leading to the conclusion of a nuclear deal between Tehran and world powers in 2015.

A day after on Tuesday, Ali Najafi Khoshroudi, spokesman for the Parliament’s National Security and Foreign Policy Committee, told IRNA that about 160 parliamentarians had already signed the letter, asking for Minister Zarif to be kept in the office.

Also, from the very beginning, Social media activists launched a campaign in social media networking sites such as Twitter, using #ظريف_بمان (means Zarif stay) to urge him to stay in his post and not resign.

Addressing the 58th annual meeting of the general assembly of the Central Bank of Iran (CBI) on Tuesday, Rouhani said Zarif – along with Minister of Petroleum Bijan Zanganeh and Central Bank Governor Abdolnaser Hemmati – was at the frontline of the battle against America, without mentioning the top diplomat’s resignation.

The Iranian president thanked the three officials for the efficient roles they had played in confronting Washington under the sanctions.

Shortly after the speech, the president’s Chief of Staff Mahmoud Vaezi highlighted Rouhani’s words in praise of Zarif as “a clear sign of the satisfaction of the representative of the people of Iran about the wise and effective positions and work of Dr. Zarif and tough response to some biased and incorrect analyses.”

Eventually, on Wednesday (Feb. 27), The chief executive officially rejected the resignation of his Foreign Minister Mohammad Javad Zarif, saying that the top diplomat has been standing on the frontline of resistance against the US pressure campaign.

Rouhani further stressed the expressions of happiness by the “sworn enemies” of Iran, such as the Israeli regime, over Zarif’s intention to step down, which he said serve as the “best evidence” of the top diplomat’s success in performing his duties and the “main reason” why he should stay in office.

In response, Zarif, in another Instagram post, thanked the Iranian nation, elites, and officials for their unwavering support in the wake of his announcement.

Separately on Wednesday, Major General Qassem Soleimani stated that Zarif has the support of senior Iranian officials, especially the Leader of the Islamic Revolution.

General Soleimani, who commands the Quds Force of the Islamic Revolution Guards Corps (IRGC), further described the top Iranian diplomat as the person in charge of Iran’s foreign policy.

It has been said that Syrian President Assad has invited Iranian FM Zarif to visit Damascus.