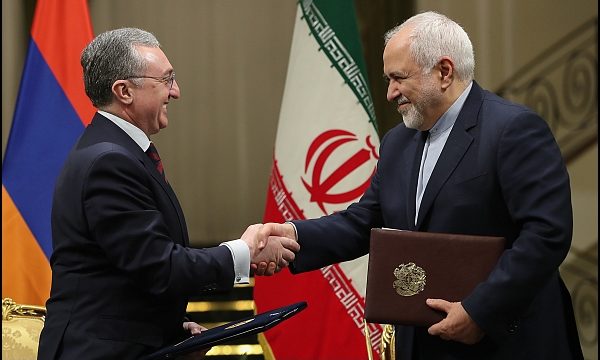 Two memoranda of understanding for joint economic cooperation were signed between Iran and Armenia on Wed. in the presence of Iranian President Rouhani and Armenian prime minister.

No intention behind Zarif absence in Assad’s meetings

Iranian Quds Force’s Commander Major General Ghasem Soleimani said that there has been no intention behind the absence of Foreign Minister Zarif in meetings of Syrian president in Tehran.

Iraq’s Prime Minister Adel Abdul-Mahdi said Baghdad would seek to finalize the “strategic dossiers” with Tehran during an upcoming visit by the Iranian president to the Arab country.

Iran, Armenia resolved to deepen ties in all available fields

In a meeting of high-ranking delegations of Iran and Armenia, attended by President Rouhani and Armenian PM Pashinyan, the two sides voiced their resolve to expand bilateral cooperation in all available fields such as energy, agriculture, technology and transportation.

Kurdistan continues oil exports To Iran despite US sanctions

Iraq’s semi-autonomous region of Kurdistan continues to keep oil exports and economic relations with Iran despite the U.S. sanctions on Tehran, a spokesperson for the Kurdistan Regional Government (KRG) has said.

An official at the Iranian Parliament, Hossein Amir-Abdollahian, said Tuesday that Iran’s strategic policy is helping to achieve peace, stability and security in the world.

Iraqi Kurdistan Region says Iran can now export up to 200,000 tons worth of goods to Syria via this autonomous region that provides the shortest land route to the Arab country in comparison to Turkey.

Iran to hold parliamentary, Assembly of Experts elections next year

The spokesman for Iran’s Interior Ministry said the parliamentary and Assembly of Experts elections will be held simultaneously across the country in February 2020.