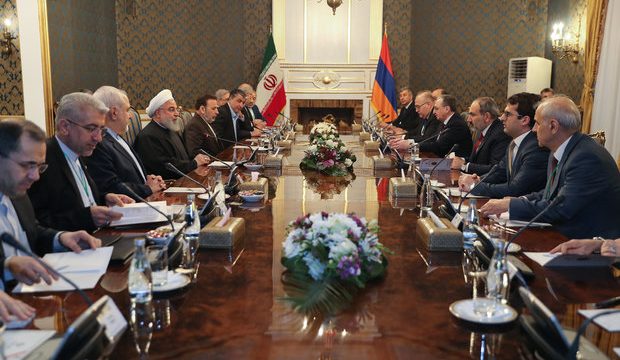 Iran, Armenia resolved to deepen ties in all available fields

MNA – In a meeting of high-ranking delegations of Iran and Armenia, attended by President Rouhani and Armenian PM Pashinyan, the two sides voiced their resolve to expand bilateral cooperation in all available fields such as energy, agriculture, technology and transportation.

Speaking on Wednesday at the meeting of high-ranking delegations of Iran and Armenia, Iranian President Hassan Rouhani said the country is always willing to develop its relations and cooperation with its neighboring countries, particularly Armenia.

He also described the developments in Armenia peaceful and democratic, adding, “this visit will further cement political, economic, and cultural relations between the two nations.”

The two countries have enough motivation and will to deepen relations, said Rouhani, adding, “we should try to promote the level of relations between the two countries to a desirable point.”

“Iran and Armenia can increase their energy cooperation, including gas and electricity both bilaterally and with other countries in the region,” he said, adding that Iran could also participate in refinery construction projects in Armenia.

“There are good potentials and opportunities in both countries for development of relations, including in agriculture, animal husbandry and industry,” he added.

For his part, the prime minister of Armenia appreciated Iran’s warm welcome, and said, “we are determined to develop relations with Iran in all fields, including economy, culture, agriculture, transportation, communications and tourism.”

“Developing Eurasian cooperation with Iran and approving preferential trade agreement will be a great development of the region,” Prime Minister Nikol Pashinyan added.