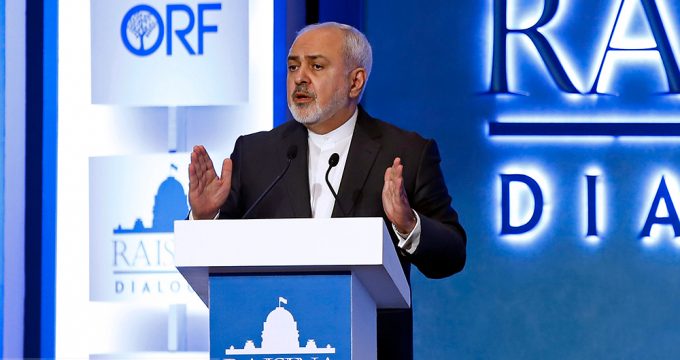 From ‘peace and joy’ to ‘Hell will freeze over’: Best of Iranian FM Zarif’s war of words with US

RT – Iran’s now-former Foreign Minister Mohammad Javad Zarif often used social media to spar with the US in the ongoing cold war between Washington and Tehran. RT takes a look at some of his ‘greatest hits.’

Zarif announced his surprise resignation on Instagram on Monday, apologizing for any shortcomings during his tenure. He had served as Tehran’s top diplomat since 2013, and before that as envoy at the UN (2002-2007).

He was also Tehran’s chief negotiator in the process that resulted in the ‘Iran Deal’, the 2015 Joint Comprehensive Plan of Action (JCPOA) between Iran and six Western nations that was supposed to guarantee its nuclear program would remain peaceful.

After the Trump administration unilaterally withdrew from the deal in May 2018, however, Zarif found himself in a war of words with Washington – often using Trump’s favorite social media platform as the preferred vehicle for delivery of weaponized satire.

Right back at you

Responding to US Secretary Mike Pompeo in June 2018, Zarif simply rewrote the US diplomat’s belligerent statement, replacing “Iran” with “US” and citing the old proverb that “Those who live in glass houses shouldn’t throw stones.”

Those who live in glass houses shouldn’t throw stones.

By July, Trump was trying the same rhetorical gambit that had worked on North Korea, tweeting in all-caps that Iran should “NEVER, EVER THREATEN THE UNITED STATES AGAIN” or it would “SUFFER CONSEQUENCES” such as history had never seen.

“COLOR US UNIMPRESSED,” Zarif shot back, noting that Iran has been around for millennia and seen many empires fall, including its own.

COLOR US UNIMPRESSED: The world heard even harsher bluster a few months ago. And Iranians have heard them —albeit more civilized ones—for 40 yrs. We’ve been around for millennia & seen fall of empires, incl our own, which lasted more than the life of some countries. BE CAUTIOUS!

In August, Zarif ruled out meeting Pompeo at the impending UN General Assembly session, telling reporters that “Americans lack honesty.” He then trolled Trump – who had made comments about “world peace” – by bringing up the US president’s previous career as Miss Universe organizer.

Reminder: International relations is not a beauty pageant, with tired clichés about a desire for WORLD PEACE.
And it is not the first time that a warmonger claims he is waging war for “world peace”.

Later that month, Zarif noted the 65th anniversary of the US-backed coup in Iran that had overthrown a democratic government in favor of absolutist monarchy, vowing “never again.”

65 years ago today, the US overthrew the popularly elected democratic government of Dr. Mossadegh, restoring the dictatorship & subjugating Iranians for the next 25 years. Now an “Action Group” dreams of doing the same through pressure, misinformation & demagoguery. Never again. pic.twitter.com/ic3o652awn

When Trump’s chief ally against Iran in the region, Saudi Arabia, found itself beset by accusations of brutally murdering Washington Post columnist Jamal Khashoggi, the US president tried to deflect by accusing Iran of malfeasance. Zarif would have none of it, wondering on Twitter if Iran was also to blame for California wildfires.

Mr. Trump bizarrely devotes the FIRST paragraph of his shameful statement on Saudi atrocities to accuse IRAN of every sort of malfeasance he can think of. Perhaps we’re also responsible for the California fires, because we didn’t help rake the forests— just like the Finns do?

‘Hell will freeze over’

Another exchange with Pompeo took place in January 2019, after the US secretary of state gave a speech in Cairo, demanding Iran become a “normal” country.

“The day Iran mimics US clients and Secretary Pompeo’s ‘human rights models’ – be it the Shah or current butchers – to become a ‘normal’ country is the day hell freezes over,” Zarif replied.

Whenever/wherever US interferes, chaos, repression & resentment follow. The day Iran mimics US clients & @SecPompeo‘s “human rights models”—be it the Shah or current butchers—to become a “normal” country is the day hell freezes over. Best for the US to just get over loss of Iran.

As Iran was preparing to celebrate the 40th anniversary of its 1979 Islamic Revolution, Trump once again called it out as the “world’s leading state sponsor of terror.” Zarif promptly shot back, accusing Washington of backing “dictators, butchers & extremists, who’ve only brought ruin to our region” out of hostility to Iran.

Iranians—including our Jewish compatriots—are commemorating 40 yrs of progress despite US pressure, just as @realDonaldTrump again makes accusations against us @ #SOTU2019. US hostility has led it to support dictators, butchers & extremists, who’ve only brought ruin to our region

Not every tweet from the Iranian FM has been confrontational, though. In December 2018, he sent out a Christmas message of “peace and joy to all,” while quoting the Koran – though he originally mis-numbered the verse he had in mind.

The angels said, “Mary, God gives you good tidings of a Word from Him whose name is Messiah, Jesus, son of Mary; high honored shall he be in this world and the next, near stationed to God. (QURAN 3:45)
May the blessings of the birth of Jesus usher peace and joy to all in 2019.