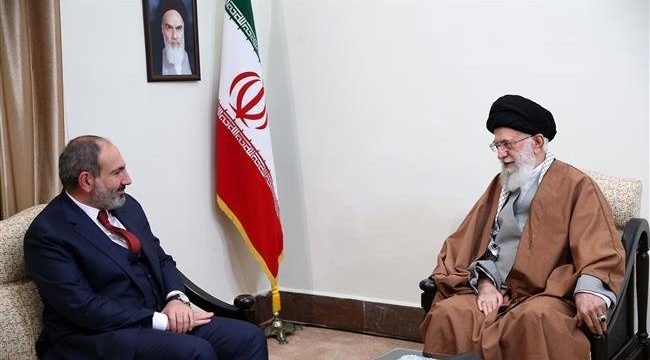 Ayatollah Khamenei: Iran, Armenia must boost ties despite US opposition

Press TV – Leader of the Islamic Revolution Ayatollah Seyyed Ali Khamenei says Iran and Armenia should work to further boost their relations irrespective of opposition from the US that seeks sedition, division and war across the world.

Ayatollah Khamenei made the remarks during a meeting with visiting Armenian Prime Minister Nikol Pashinian in Tehran on Wednesday.

The Leader underlined the need for Iran and Armenia to put the goal of achieving ever-growing friendship and cooperation on their agenda to serve the interests of the two countries.

“Indeed, the Americans are totally untrustworthy and are seeking sedition, corruption, division and war everywhere, and they are against Iran-Armenia relations as well as [other] nations’ interests, but we have a duty to boost our cooperation and interactions in response,” the Leader noted.

Ayatollah Khamenei described Iran and Armenia as good neighbors that enjoy historical ties and underlined the need for raising the level of their economic cooperation, stressing, “Unlike what the Americans desire, the relations between Iran and Armenia should be solid, constant and friendly.”

The Leader mentioned amicable relations between Iran and Armenia throughout the history and said, “Iran and Armenia have never had any problems with each other, and we feel duty-bound under Islamic teachings to practice good neighborliness. Of course, American officials like [National Security Adviser] John Bolton have no understanding of such issues and human relations.”

Ayatollah Khamenei said the current level of economic cooperation between Iran and Armenia was way below the potential of the two countries, calling for the two sides to seriously follow up on the implementation of the agreements signed during the visit.

The Leader also touched on the Karabakh issue and said the dispute could be settled through continued negotiations between Armenian and Azeri officials and expressed Iran’s readiness to contribute to its resolution.

The Armenian premier, for his part, described his meetings in Tehran as “constructive and promising” and hoped for the immediate implementation of the agreements signed in his visit.

Pashinian said the history of Iran-Armenia good ties could contribute to further promotion of relations.

“Armenia has never joined and will not join any measure against Iran and we believe the development of ties with Iran serve our country and people,” he said.

Back in October, Bolton visited Armenia, where he vowed during an interview that President Donald Trump’s administration would “squeeze Iran” with maximum economic pressure in response to what he called Tehran’s “malign” behavior in the Middle East and around the world.

However, Pashinian told the Armenian Parliament a week later that he had made clear to Bolton during his visit that Armenia would maintain “special relations” with its neighbor Iran.

“I reaffirm the position that we should have special relations with Iran and Georgia that would be as far outside geopolitical influences as possible. This position was very clearly formulated also during my meeting with Mr. Bolton, and I think that the position of Armenia was clear, comprehensible, and even acceptable to representatives of the US delegation,” the Armenian leader said.

He added that Armenia “has its own national and state interests, which do not always coincide with the interests and ideas of other countries, any other country.”