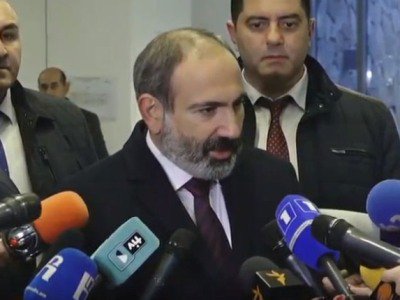 The Armenian prime minister was welcomed by Iranian Minister of Energy Reza Ardakanian at Mehrabad Airport this morning.

Nikol Pashinyan will be officially welcomed in a few hours by Iranian President Hassan Rouhani at Sa’dabad Palace in Tehran.

Following the reception, official talks will kick off between Iranian President Rouhani and Armenian Prime Minister Pashinyan and his accompanying delegation.

The visit of the prime minister of Armenia to Tehran today will be a milestone in the relations between the two countries at this critical juncture. Given the serious and apparent resolve of the two sides, the senior Iranian and Armenian officials will undoubtedly be taking steps towards a comprehensive development of relations.

In 2017, Iran was Armenia’s sixth major trade partner. The country improved its standing to fifth in 2018.