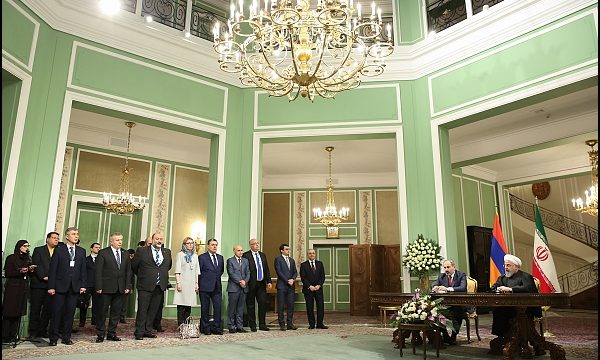 “I must state that the Government of Armenia appreciates the implementation of foreign investment projects, including the Iranian investment programs,” Pashinyan was quoted by Armen Press as saying on the sidelines of a meeting with Iranian President Hassan Rouhani in Tehran.

He added, “Armenia has the necessary technical, economic and professional potential for cooperation in these areas.”

“Recently, in December, 2018, an Armenian-Iranian joint venture for the production of gas cylinders on plastic basis was opened in Vanadzor, Armenia. The founders of the plant assure that the production will start in the near future,” Pashinyan said.

Commenting on the Armenian-Iranian cooperation prospects in tourism, Pashinyan noted that each country is represented by its history, culture, traditions.

“Obviously, tourism helps our peoples to get acquainted with each other’s history, culture, traditions, spiritual and religious values, scientific and technological achievements. Tourism development is one of our country’s priorities, and we are making great efforts to make our country attractive to tourists. Following the visa abolition arrangement in 2016, the number of Iranian tourists visiting Armenia has considerably increased, especially in the days of the Iranian New Year – Nowruz,” he said.

“Special events are being held in these days for ensuring the security of Iranian tourists; 911 services are available in Persian. I think that tourism is a promising field, and the indicators tend to grow in that area,” he added.