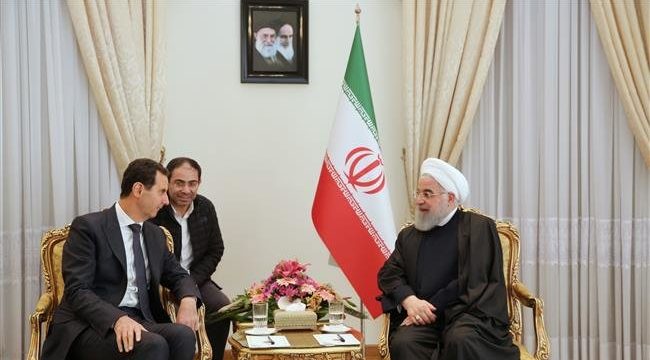 Press TV – Iranian President Hassan Rouhani says the Islamic Republic is ready to help Syria with its reconstruction plans and restore stability to the war-ravaged country.

“The Islamic Republic of Iran, just like in the past, will stand by the Syrian nation and government,” Rouhani said in a meeting with Syrian President Bashar al-Assad in Tehran on Monday.

He added that Tehran will also help Damascus with the repatriation of Syrian refugees to their homeland.

He emphasized that multilateral cooperation among regional countries has led to the promotion of security across the region.

The Iranian president also noted that during a recent meeting in Russia’s resort city of Sochi, Iran, Russia and Turkey stressed the importance of protecting Syria’s territorial integrity and condemned the continued presence of US and foreign forces in the Arab country without Damascus’ permission.

Speaking at a tripartite meeting with Russian President Vladimir Putin and his Turkish counterpart Recep Tayyip Erdogan in Sochi on February 14, Rouhani said terrorists must not feel safe in Syria or any other part of the world.

“Terrorists must not feel safe in this country or any other part of the world and their supporters should not assume that they can play the terrorism card to their benefit in domestic, regional, or international equations,” the Iranian president said.

The Sochi summit, hosted by Putin, was aimed at solidifying the three countries’ cooperation towards returning peace and stability to Syria.

Over the past years, Iran and Russia have been respectively lending military advisory support and aerial backup to the Syrian military in its battle against militants and Takfiri terrorists. The foreign-backed groups started a campaign of bloodshed and destruction against the Arab country in 2011.

Iran, Russia and Turkey, known as the guarantor states of a ceasefire regime in Syria, have been mediating peace negotiations between representatives from the Damascus government and opposition groups in a series of talks held in the Kazakh capital of Astana and other places since January 2017.

Assad, for his part, said the Syrian government and nation are always thankful for Iran’s support for Damascus in the campaign against terrorists while lauding Tehran’s efforts to restore security to Syria and the entire Middle East region.

The Syrian president added that Iran and Syria enjoy close cooperation at regional and international levels, particularly at the United Nations.

He emphasized that the political process in Syria should safeguard the Arab country’s territorial integrity and independence and respect the demands of the nation.

The Leader said the Islamic Republic is honored to support Syria and considers it as equal to supporting the entire resistance front.

The Leader mentioned resistance of Syrian president and people as the main reason behind the defeat of the United States and its regional mercenaries, noting, “The Islamic Republic of Iran considers supporting the Syrian government and people as helping the resistance movement and current, and takes pride in it from the bottom of its heart.”