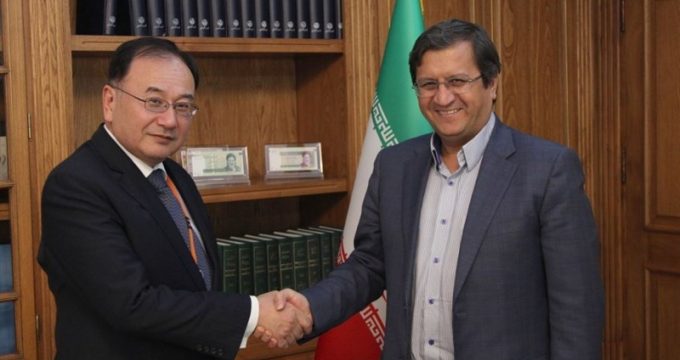 Tasnim – Japan’s ambassador to Tehran expressed his country’s resolve to proceed with economic cooperation with Iran.

In a meeting with governor of the Central Bank of Iran (CBI) Abdonnaser Hemmati in Tehran, Japan’s Ambassador Mitsugu Saito said the Japanese companies have kept conducting their businesses in Iran over the past months despite the US sanctions against Tehran.

He underlined that Japan will continue economic relations with Iran according to its interests.

Saito also hailed the beginning of banking interaction between Iran and Japan as the onset of a new round of economic and trade ties between the two countries.

For his part, the top Iranian banker touched on the resumption of Iranian oil exports to Japan, and expressed the hope that Tehran and Tokyo would bolster economic relations.

The two officials also discussed the role that the Japanese banks could play in settling the oil debts and clearing transactions between the two sides.

Japan is among eight countries with the US’ 180-day waivers allowing them to keep importing Iranian oil through May 4. Confusion surrounding shipping, insurance and banking rules under the US sanctions kept some of the countries from resuming imports for months after the US granted waivers on November 5.

All transactions under the US State Department’s current “significant reduction exemptions” must be completed by May 4.

Fresh waivers would start May 5 for countries that the US determines have met their promises to significantly reduce Iranian imports in the previous six months.