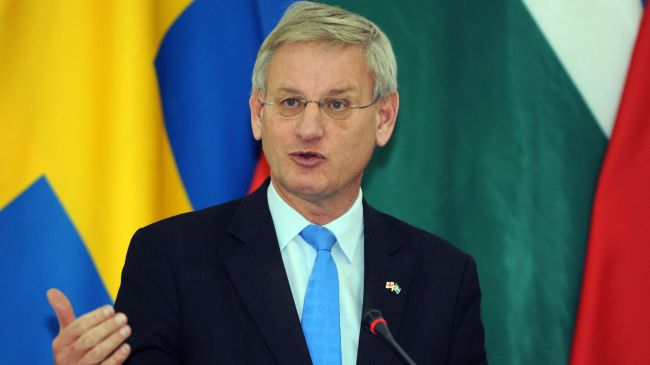 US seeks to create excuse for direct confrontation with Iran: Former Sweden FM

IRNA – US demand of EU to stop its efforts to prevent the JCPOA from collapsing completely is tantamount to wishing that Iran also leave the agreement and seek to create an excuse for a direct and open confrontation with Iran, former Sweden’s Minister for Foreign Affairs Carl Bildt in an article in the Washington Post wrote.

After the Trump administration’s strange Warsaw meeting on the Middle East and its less than impressive performance at the Munich Security Conference, key European officials were left scratching their heads.

That the Trump administration has decided to oppose the Joint Comprehensive Plan of Action nuclear agreement with Iran was hardly news. And it’s hardly news that most of the rest of the world, certainly including Europe, supports the agreement.

But in his speech in Munich, Vice President Pence went one critical step further, demanding that Europe also should leave the agreement. He also demanded that Paris, London and Berlin should shut down the instrument they have set up for facilitating transactions with Iran. No contact whatsoever with Iran should be allowed seems to be the new line.

To demand that Europe should stop its efforts to prevent the JCPOA from collapsing completely is tantamount to wishing that Iran also leave the agreement. And that’s where the mystery lies: Can it really be in the United States’ rational policy interest to try to get Iran to resume all of the nuclear activities that are prohibited by the agreement?

But that actually seems to be what the United States’ policy is aiming at. There is no other rational way to interpret the new demands that Pence presented in Warsaw and Munich.

The only rational explanation for such a policy is that it seeks to create an excuse for a direct and open confrontation with Iran. If Tehran leaves what remains of JCPOA and resumes now banned nuclear activities, one can be dead certain that voices not just in Tel Aviv would claim that a nuclear bomb is imminent and that immediate military action must be taken.

If anything, these demands are likely to make the Europeans even more determined to try to get Iran to continue to respect the agreement. A slide toward war is definitely not in the interest of Europe.

Instead, the European approach through the so-called E4 talks is now to engage Tehran in a diplomatic dialogue that is focusing initially on Syria, with the intention of gradually broadening to other regional issues of mutual concern. On Syria there are certainly fundamental disagreements but at least a shared interest in fighting the Islamic State in the region. And Washington is certainly not blind to the fact that a dialogue with Tehran is a necessary part of the attempts to forge a peace in both the Yemen and the Afghanistan conflicts.

In his combative performance at the Munich conference, arriving after having spent days in talks in Baghdad and Beirut, Iran’s foreign minister Mohammad Javad Zarif talked about an almost “pathological obsession” with Iran in US policies, and you could see Europeans discreetly nodding their heads at the description.

Europe certainly shares the concern expressed by a number of countries about aspects of Iran’s regional behavior, though it sees little grounds for the more apocalyptic prophesies heard from Pence in Warsaw and Munich.

“We Europeans are not separated from the Middle Eastern region by a vast ocean. We would certainly shy away from any policy that could initiate another war in the conflict-ridden region.”, Bildt concluded.