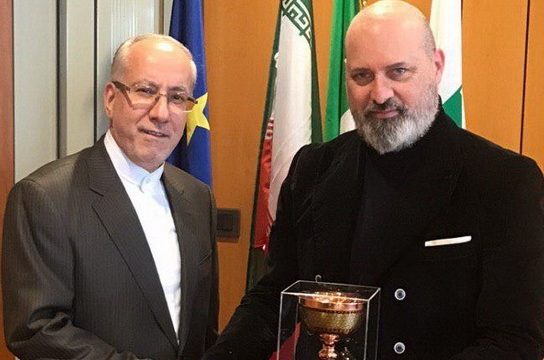 In a meeting with President of Emilia-Romagna Stefano Bonaccini, he recalled remarkable growth in trade exchanges between Iran and Italy in recent years, maintaining that Italy was Iran’s first trade partner among the European states in 2017.

Referring to East Azerbaijan province’s economic capacities and its officials’ willingness to enhance cooperation with Emilia-Romagna, he hoped that a specific framework will be drawn out for trade interactions at the provincial level following signing cooperation documents between the provinces in the coming months.

Bonaccini, for his part, elaborated on his province’s capabilities and capacities and welcomed promoting interaction with Iran, particularly East Azarbaijan.

Prior to the meeting, Iranian ambassador held talks with a number of heads of trade and economic organizations to explore ways for promoting communications between the two countries’ private sectors.