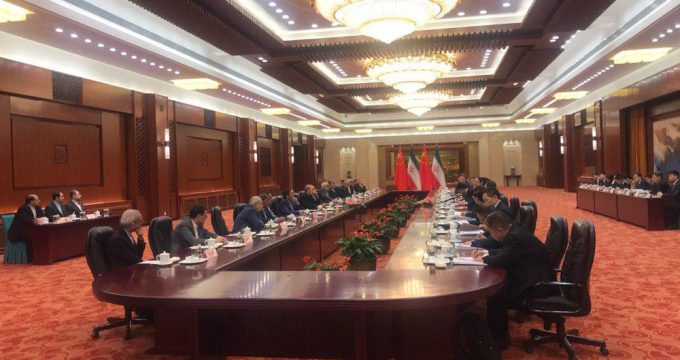 February 24, The Iran Project – While both China and Iran have been targeted by the US economic pressure, a large high-ranking politico-economic delegation, headed by Parliament Speaker Ali Larijani, traveled to China last week (Monday Feb. 18) for a two-day official visit to hold talks with senior officials of the East Asian country in various fields.

Senior high-level governmental officials, including the Iranian minister of petroleum, minister of foreign affairs, minister of economy and finance, and CEO of Central Bank of Iran accompanied Larijani to China. The said officials met their Chinese counterparts to promote bilateral ties.

Upon arrival at the Beijing airport on Tuesday morning, Ali Larijani said, “Due to the interests shared between Iran and China since a long time ago, consultations and talks between the two sides can be very effective.”

Larijani visited Beijing for key talks following his last week’s trip to Tokyo, where he held talks with senior Japanese officials on the expansion of commercial and economic cooperation.

On May 8, the administration of US President Donald Trump pullout Washington from a 2015 nuclear deal between Tehran and six world powers and announced re-imposition of the sanctions against the Islamic Republic that had been lifted as part of the agreement.

Meanwhile, the US  and China have been engaged in economic tensions over the past months, in what is feared to turn into an all-out trade war between the world’s two largest economies.

The US has already imposed tariffs on $250bn worth of Chinese goods, and China has imposed duties on $110bn of US products in tit for tat.

“I would like to take this opportunity to have this in depth strategic communication with my old friend to deepen the strategic trust between our two countries and to ensure fresh progress of the bilateral comprehensive and strategic partnership,” he stressed.

Praising the top Iranian diplomat he noted that “I saw on television how you defended the rights of Iran loud and clear at the Munich Security Conference. I think an audience of hundreds of millions of Chinese also watched what you said and you are a famous person now.”

China to boost ‘strategic’ partnership with Iran regardless of global developments

During a meeting with visiting Iranian parliament speaker, Chinese President Xi Jinping said: “No matter how the international and regional situation changes, China’s resolve to develop a comprehensive strategic partnership with Iran will remain unchanged.”

China and Iran should further deepen strategic mutual trust and continue to support each other on core interests and major concerns, Xi stressed, while adding “We support Iran in playing a constructive role in maintaining regional peace and stability and are willing to closely communicate and coordinate on regional issues.”

For his part, Larijani said Iran took a “strategic and long-term” view to developing relations with China.

The Chinese president also met with Iranian Foreign Minister Mohammad Javad Zarif, during which the two sides discussed latest regional and international developments as well as the expansion of bilateral ties.

“No country can damage Iran-China ties”

During talks with Lee Shoe Young, chairman of Iran-China parliamentary friendship group, Ali Larijani said that friendly ties between the two states date back more than 2,000 years, noting that “No country can damage the Iran-China relations.”

Meanwhile, Li said the presence of representatives from all parliamentary commissions in Iran-China friendship group indicates the importance of ties between the two countries.

Foreign Minister Mohammad Javad Zarif in a message welcomed the visit made by the Iranian delegation, saying important talks were held by both sides.