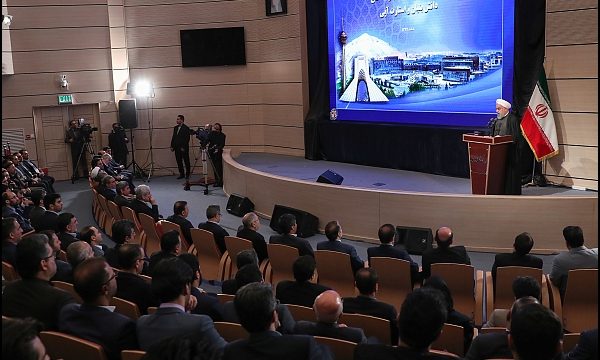 Rouhani to Trump: Countries building wall around themselves destined to fail

MNA – Iranian President Hassan Rouhani said that countries which build walls around themselves will be destroyed from inside and will achieve no progress.

He made the remarks Saturday in a meeting with heads of knowledge-based companies and startups in Tehran.

Pointing to Trump’s administration insistence on building physical walls along its southern borders, Rouhani said, “they do not know that all their progress were because of the fact that there existed no walls for many years.”

If there is any growth and progress in the United States, it is because of the presence of different nationalities in the country, he highlighted.

President described working towards self-sufficiency as a practical fight against imperialism and major powers, adding, “sanctions are aimed at reducing the growth of technology in our country … but we need to use sanctions as an opportunity for growth.”

Referring to sanctions, he said, “some countries think that sanctions are a way for reducing the pace of development in a country”. “Of course, this increases motivation for us in the country, so that we can produce the part we used to import.”

Rouhani described freedom of thought as the most important infrastructure for progress in science, society and politics, adding, “we believe that development in science and technology happens under freedom.”

Appreciating the work of knowledge-based enterprises and Presidential Deputy for Science and Technology, Rouhani said, “in the past 5 years, very good work has been done in science and technology.”

“One of the responsibilities of the government is facilitating communication with the world,” he continued, adding, “we need to have close relations with different intellectuals from different countries.”

Rouhani also went on to say, “every new technology that is built inside the country has to be exported after supplying the domestic demands.”

He also said, “we need to help knowledge enterprises in different fields such as insurance, tax, loans and other fields to achieve our desired result.”