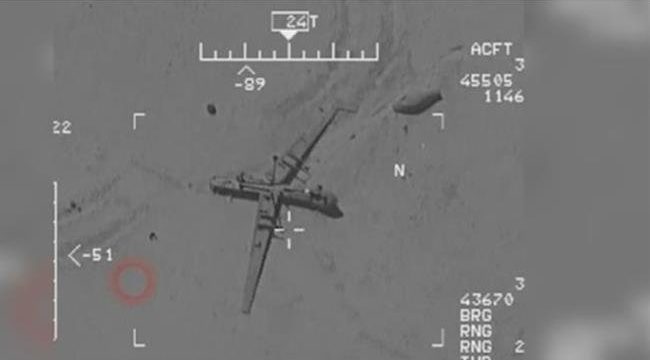 Press TV – Iran’s Islamic Revolution Guards Corps (IRGC) says it has penetrated US drone command and control networks, releasing footage of a US military aircraft bombing a hacked drone out of fear that it might end up in the hands of Iranian armed forces.

According to IRGC Aerospace Commander Brigadier General Amir-Ali Hajizadeh, the US drone was operating in Syria and Iraq when it was forced to make an emergency landing due to a problem it faced during flight.

The drone was landed with difficulty in a desert area 10 km away from a US base, a report by Fars news agency said.

“However, the Americans did not dare to approach their own drone” and had to bomb it with a warplane, it added.

“Seven or eight aerial vehicles with regular flights in Syria and Iraq were under our control; we could monitor their data, and managed to acquire their first-hand information,” General Hajizadeh said.

The footage released by the IRGC first shows the US drone facing a technical failure, and then a second drone sent by the US military to monitor the first UAV, and capture its destruction by a US jet fighter.

Iran famously grounded a US unmanned aerial vehicle RQ-170 Sentinel in December 2011 using electronic warfare techniques, as the stealth aircraft was flying over the Iranian city of Kashmar near the Afghan border.

Back in November 2018, General Hajizadeh highlighted the Islamic Republic’s drone intelligence, saying Iran now knows in which hangar of the US’ Kandahar Airfield in Afghanistan the RQ-170 had been deployed.

According to the IRGC Aerospace commander, Iran used the reverse-engineered version of the RQ-170 drone to target Daesh positions in Syria and Iraq.

Iran currently possesses the biggest collection of captured or downed American and Israeli drones, including the US’ MQ1, MQ9, Shadow, ScanEagle, and RQ-170 as well as the Israeli regime’s Hermes, Hajizadeh added.

The Israeli drone was intercepted and shot down in October 2014 by IRGC forces on its way to the Natanz nuclear facility in the central Isfahan province.

In the field of unmanned aerial vehicles, Iran is now one of the world’s top four or five countries, and the top drone power in the region, General Hajizadeh said.

“The Iranian-made Shahed-129 drone, for example, had round-the-clock flights over terrorists’ positions in Syria and Iraq, and its services were also used by the Syrian army, the Russians, the Hezbollah forces, and others,” he added.

Iran’s UAV program has expanded in recent years with more than a dozen models operating for a variety of functions ranging from surveillance to intelligence gathering, carrying bombs and Kamikaze operations.