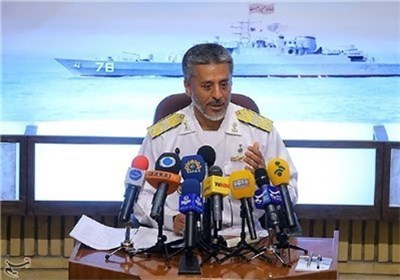 IRNA – Iranian army is vigilantly monitoring all threats in the region, Deputy Commander of the Islamic Republic Army for Coordination Affairs said.

Iranian armed forces prepare themselves to counter any kind of threats, Rear Admiral Habibollah Sayyari said on the sidelines of Velayat-97 wargame which started in the Sea of Oman on Friday.

Referring to indigenized equipment and systems in the current wargame, the Rear Admiral further noted that Iran is not in need of borrowing any equipment.

`Velayat 97′ wargame (February 22-24) started in the Sea of Oman on Friday with the code of ‘Ya Zahra’ to parade different kinds of the surface and under-surface navy fleet.

More than 100 of the Navy fleet, including different kinds of destroyers, missile launching navies, logistic navies, light and heavy submarines, hovercrafts, fixed wing aircrafts, and helicopters have participated in the parade.