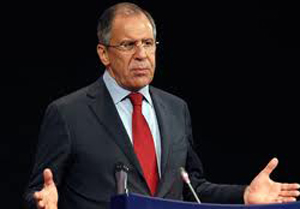 Sergey Lavrov made the remarks in a ceremony held to commemorate the death anniversary of former Russian diplomat Vitaly Ivanovich Churkin.

The US weakened NPT by exiting the JCPOA and endangered the agreements reached about Iranian nuclear program, he added.

The official said the US’ measures could increase tension in region.

The first round of the sanctions snapped back into place in August, with the second round, targeting the energy and oil sectors, took effect on November 5.