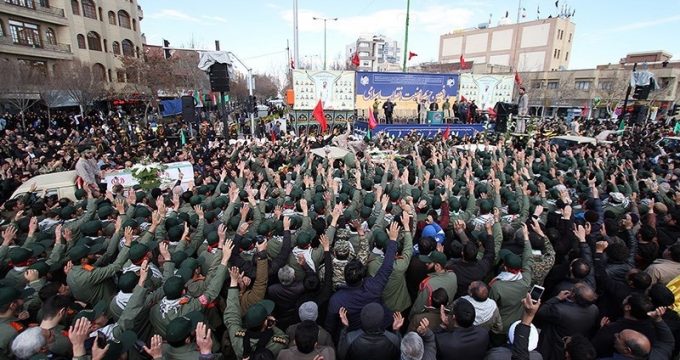 Alwaght – Last week, a terrorist blast hit the Iranian border guards in the eastern province of Sistan and Baluchistan killing 27 and wounding a dozen others. The attack drew a strong reaction from the Iranian political and military officials. In the middle of the reactions, what caught the media focus was the remarks made by Iranian Revolutionary Guards Corps (IRGC) chief Major General Mohammad Ali Jafari who said Tehran was “running out of patience with treacherous Saudi Arabia and the UAE”, both behind a string of terrorist attacks on Iranian forces. He said the Islamic Republic no longer holds the previous considerations and will directly take hard measures in retaliation of the “blood of our martyrs.”

Iranian officials in related and relatively similar stances accused neighboring Pakistan of harboring the anti-Iranian terrorist factions who every now and then assault the border posts in the country’s east. Bahram Qassemi, the spokesman to the Iranian foreign ministry, said on Sunday that the ministry summoned Pakistan’s ambassador to voice Tehran’s angry protest to Islamabad. The IRGC head already warned that Pakistan will “pay a high price” for its ignorance of anti-Iranian attacks launched from its territories.

Alwaght in an effort to elaborate on the case talked to Abbas Fayaz, an Iranian expert of the Indian Peninsula affairs.

The first question was about the reason behind IRGC chief’s direct attack at Pakistan’s Inter-Services Intelligence (ISI) as the agency involved in Zahedan city bombing. Mr Fayaz responded that among the powers in Pakistan, the army has the upper hand and inside the army, the strongest institution dominating the politicians and the state’s policies is the ISI which implements the policies of the army as the top policy-making body in politics and security matters. Directly addressing the ISI, the expert went on, General Jafari sent a message to Islamabad that the Islamic Republic is fully aware who the decision maker is in Pakistan on whether to ignore or block terror actions against its neighbor Iran.

“Well reception of the message can take Pakistan to respond positively to Iran’s demands to prevent the use of Pakistani soil by the attackers. As we saw, immediately after General Jafari’s comments, the Pakistani sides stated readiness to take joint actions against these factions and they started measures in the border areas to cleanse them.”

Asked why despite its friendly relations and acceptable level of cooperation with Iran, Pakistan does not eradicate the anti-Iranian factions on its soil and if other countries’ interests influenced this Pakistan behavior, Mr Fayaz answered that the ISI as the top intelligence force in the country has broad contacts with a number of Arab countries, distinctly with Saudi Arabia and the UAE. Internationally, the ISI is closely linked to the US Central Intelligence Service (CIA). The cooperation with the CIA has so far experienced many ups and downs, however, mainly when it comes to the Afghanistan case.

“Pakistan is not seeking damage to the Iranian interests”, the expert told Alwaght, adding “the Pakistani security men and politicians have no reason for hostility towards Iran. To put it another way, this Pakistani behavior is not a principal policy. Rather, it is encouraged by the country’s need for aids from the reactionary Arab regimes like Saudi Arabia. These regimes bankroll the terrorists hiding in Pakistan. The Pakistani officials, taking advantage of the generous Arab supports, turn a blind eye to the terror groups. This makes Pakistan a suitable launching pad for attacks against Iran.”

“Tehran repeatedly protested to Islamabad for assaults on its forces launched from the Pakistani lands but did not receive a proper response,” Alwaght reporter told Mr Fayaz. “Is Pakistan unable or unwilling to address such a demand?,” he asked.

The expert answered that Pakistan has not shown a fixed reaction to such protests. It sometimes cooperated with Tehran. “For example, it extradited a number of Rigi terrorist faction terrorists taking shelter in Pakistan territories. The Pakistanis also helped with the release of 5 out of 14 Iranian border forces abducted by the terrorists. But the important issue is that Pakistan has so far declined to take firm actions against them. The ISI apparently knows their whereabouts and can easily take actions. But the laxity with them is driven by the considerations the supporters of these groups, on top of them Saudi Arabia, want Pakistan to show so that Islamabad can enjoy their aids which do not come without expectations.

Alwaght asked the expert about the options at Iran’s disposal to prevent such attacks or respond to the agitators after the IRGC chief warned Tehran was losing patience with the terrorists’ backers. Responding, Mr Fayaz said there is no doubt that the Islamic Republic has huge capabilities in military, intelligence, and diplomatic areas, with the Iranian power of influence across the region not covert to anybody. “So far,” he said, “the Iranian policy has been based on respect to the neighbors and steering clear of tension escalation with them. Pakistan is no exception. This principle has been the main reason driving the Iranian patience with Pakistan security shortcomings. The terrorists have abused this Pakistani behavior and grew arrogant.”

According to Mr Fayaz, Iran apparently will look at all of the available choices and will further ask Islamabad to strongly step in against the anti-Iranian militias. But if Pakistan continues to show leniency with them, Iran’s hands are open for diplomatic actions through the international organizations, as well as reviewing its regional policy.

“Relying on its military might and regional intelligence dominance, Iran can itself take serious actions against the terrorism which is a legal right and compliant with the international law. Of course, the best choice is the Islamabad cooperation with Tehran to push back the terrorism risks from the region. We hope that the Pakistani side seriously pursues collaboration with Iran.”