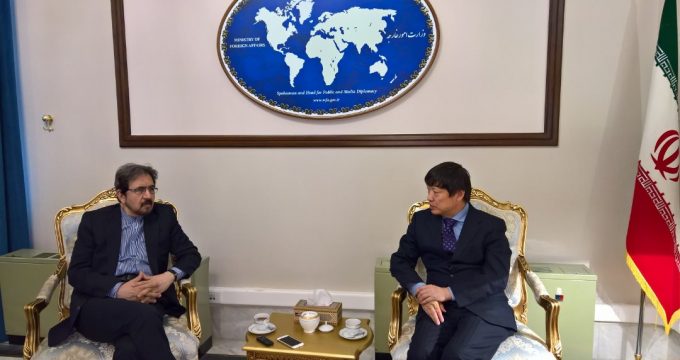 Speaking in a meeting with the chief editor and editorial board of Chinese Global Times Daily on Wednesday, Qasemi made the remarks in reaction to the US President Donald Trump’s claim of interest in talking with Tehran.

‘The US does not want serious talks and should firstly revive the lost trust,’ said Qasemi.

He went on to say, ‘Iran decides based on the principle of independence and national interests and Tehran’s policies do not depend on the view of global powers.’

Commenting on the ongoing tension in Tehran-Washington relations, Qasemi said, ‘Problems have not been caused by Iran and their root cause is unfair sanctions imposed on our country by the US contrary to international regulations and after its leaving the Joint Comprehensive Plan of Action (JCPOA) and violating the resolution 2231.’

He added, ‘If the US moves one step forward today, it will take the second step tomorrow; global developments testify the US’ unending desire; so, one cannot submit to Washington’s demands.’

He recalled that the world is fed up with the US’ unilateralism. ‘Resistance of China, Russia and Europe to the US at least politically should be taken one step forward, showing that world conditions have changed compared to the past.’

As for Iran’s resistance against Washington’s policies, Qasemi said, ‘Firstly, we should defend our independence and border integrity. Furthermore, such factors as Iran’s background image of Washington policies; Washington’s wrong policies on Middle East, including Afghanistan, Syria, Iraq and Yemen; its support for Tel Aviv and its support for extremism in the region; its help for armament of certain regional states and collection of policies, which have resulted in such cases as Taliban, al-Qaeda and Daesh (ISIS), will make resistance against the US policies justifiable.’

As for impact of the US sanctions, Qasemi said, ‘Our people experienced such conditions in the past too and are seriously sensitive over their independence. We can skip the crisis and overcome sanctions. Also, we are monitoring countries’ stances in the periods and will judge on them in the future. Sanctions conditions will not persist and eventually, Iran has the power to make the US understand that it can rectify its record and recognize Iran as an independent state.’