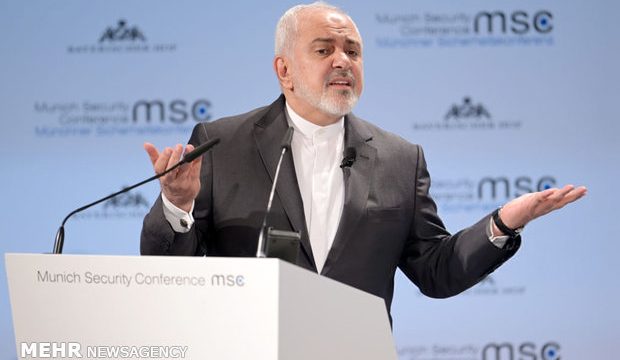 Zarif accused the United States of having an “obsession” with Iran for 40 years. He added, “In the past two years the US has taken its animus towards Iran to a new extreme” by rejecting the Joint Comprehensive Plan of Action (JCPOA) and attempting to force others to violate the nuclear deal. He said that Vice President Mike Pence, who spoke the day before him at the Munich conference, “arrogantly demanded” that Europe jeopardize its own security and leave the deal.

Continuing on America’s “malign obsession,” Zarif said that the United States is “imposing costs” on other countries, particularly in the Middle East. Zarif accused the United States and indirectly Saudi Arabia of fomenting instability in the region “all in the name of containing Iran,” particularly via the bombing of Yemen, aiding and abetting the war in Syria and kidnapping Lebanon’s Prime Minister Saad Harriri. In response to accusations that Iran interferes in the region, Zarif said that the United States has bases all around Iran’s borders and floods the region with US arms.