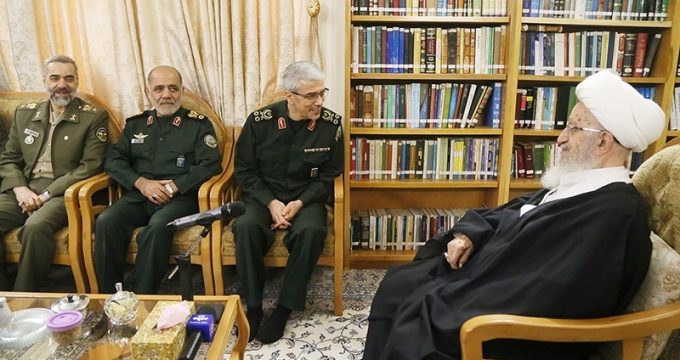 In a meeting with Chief of Staff of the Iranian Armed Forces Major General Mohammad Hossein Baqeri in the city of Qom, Ayatollah Makarem Shirazi said the country’s defense and military preparedness must increase continuously and its defense equipment be updated so that the adversaries would not dare attack the Islamic Republic.

“We are not after attacking any country, and are not belligerent and expansionist either, but we need such (military) equipment to protect and defend ourselves,” he said.

The Leader said that Iran’s enhanced military preparedness would frighten the foes and be deterrent against the enemies, underlining, “The Islamic Republic is not intending to begin a war against anyone, but you (the Iranian military forces) should boost your capabilities in such a way that not only the enemy would be fearful and afraid of attacking Iran, but also thanks to the solidarity, might, and effective presence of the Armed Forces, the specter of threats against the Iranian nation would be swept away.”