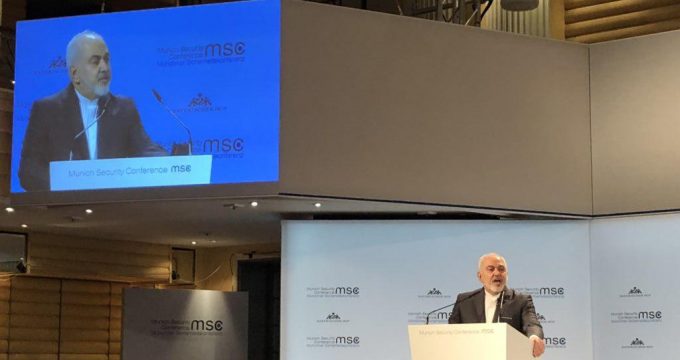 February 19, The Iran Project – While the US was desperately trying to isolate Iran, during his Munich address, Iranian Foreign Minister Mohammad Javad Zarif seized the stage of the world’s premier security conference. He held the audience of power-brokers rapt for nearly 40 minutes as he thrashed the Trump administration, fired a pointed demand at Europeans to take practical steps to save the 2015 nuclear deal. His striking performance quickly became the most talked-about presentation at the annual Munich Security Conference.

Zarif visited Germany to take part in the 55th Munich Security Conference (MSC) 2019, which was held on February 15-17 with the participation of high-ranking officials including foreign and defense ministers from the EU and NATO.

Holding talks with top world leaders who were present at the conference, meeting with Iranian expats, delivering a speech at the event and interview with foreign media were among the Iranian foreign minister itinerary.

On the sidelines of the MSC 2019, FM Zarif met with the top officials of more than 11 countries and international organizations.

It was reported that more than 100 political, security and international figures, including heads of state, foreign and defense ministers and some international organizations’ officials attended this year’s event.

The Munich Security Conference, which being took place in Germany since 1963, aims to contribute to the peaceful resolution of conflicts by sustaining dialogue. The conference is a forum for debating international security policy.

Its annual security report released ahead of the conference, “The Great Puzzle, Who Will Pick Up the Pieces,” noticed the changing roles of the United States, China and Russia in world politics and security — topics of the conference.

Zarif’s and his South Korean counterpart Kang Kyung-wha held talks and the top Korean diplomat expressed Seoul’s willingness to continue decades of close relations with Tehran despite the sanctions and pressures imposed on Iran.

The minister met and held talks with executive director of UNICEF, Henrietta H. Fore. The cooperation between Iran and the UN International Children’s Fund was the main focus of the meeting between the two sides.

Moreover, Zarif met with UN Under-Secretary-General for Political Affairs Rosemary DiCarlo. The two exchanged views on Iran-United Nations cooperation, implementation of resolution 2231, the payment system that three major European countries recently announced for Iran to help the country get around US sanctions (INSTEX), as well as various international and regional issues, including the situation in Afghanistan, Yemen, Syria and Lebanon.

The top diplomats of Iran and Germany Mohammad Javad Zarif and Heiko Maas have held talks. During the meeting, the two top diplomats conferred on issues of bilateral relations, the success of the EU trade mechanism for trade with Iran to get around US sanctions (INSTEX), and the most important regional and international issues, including the situation in Yemen, Syria, Afghanistan as well as some other issues.

Zarif held a meeting with the Kyrgyz Republic Foreign Minister Chingiz Aidarbekov to discuss various issues, including expansion of bilateral relations in all fields, especially in the economic and cultural areas as well as international cooperation.

Addressing the 55th Munich Security Conference, Zarif said, “At the recent meeting of “the unwilling” and “the openly-coerced” in Warsaw, the US Vice President and the Secretary of State both blasted Europe for even attempting—albeit without much practical success—to abide by its obligations under the JCPOA and Security Council Resolution 2231.”

“Instex (the mechanism) falls short of commitments by the E3 (France, Germany, Britain) to save the nuclear deal,” Mohammad Javad Zarif went on to add that. “Europe needs to be willing to get wet if it wants to swim against the dangerous tide of U.S. unilateralism.”

In the interview section of Munich Security Conference,  Javad Zarif strongly defended Iran’s missile program and slammed the West for selling weaponry and having a dual standard regarding the human rights issue.

Zarif said that has been negotiating the Joint Comprehensive Plan of Action and knows that there is no ban on Iranian missiles entirely adding that UN Resolution 2231 only bans development of missiles ‘designed to be capable of delivering nuclear weapons’.

Regarding the Western countries’ huge sales of weaponry to the regional countries, Zarif asked how Iran could defend itself in this situation if ‘another Saddam’ decided to kill Iranian people.

He stated that when the US President is selling ‘beautiful’ weaponry to Saudi Arabia while Iran receives no weapons, Iran will be defenseless.

“Iran cannot forever foot whole bill for vital global security achievements–whether it’s the JCPOA or combating of drug & human trafficking. Time for Europe to get wet if it wants to swim against the dangerous tide of US unilateralism,” Zarif tweeted after delivering his speech at Munich Security Conference.

In a wide-ranging exclusive interview with NBC News on when asked if there would be a war between Iran, the US and Israel, Zarif warned the United States and its allies that it would be “suicidal” to go to war with Iran.

He noted the “same gang” behind the US invasion of Iraq in 2003 were “at it again” in pushing for war with Iran.

“But I think at the end of the day, some sense will prevail and people will find out that it’s suicidal to engage in a war with Iran.”

European officials brushed off US Vice President Mike Pence’s calls during a diplomatic trip to the continent to ratchet up pressure on Iran, saying they will continue defending the 2015 nuclear deal and stay engaged with Iran’s government.

German Foreign Minister Heiko Maas said Friday that Europe would seek to keep the deal alive. But pressed on what more Europe could do as its companies exit Iran under US pressure, he declined to spell out any new tactics.