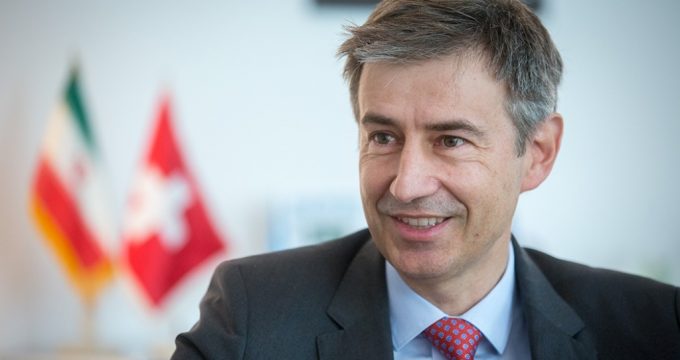 MNA – Swiss Ambassador to Tehran Markus Leitner in his meeting with Iranian Minister of Economy Farhad Dejpasand on Monday expressed his country’s readiness for expansion of cooperation with the Islamic Republic.

In this meeting, Dejpasand pointed to the long history of amicable relations between Iran and Switzerland, and termed Switzerland as an independent country with full security for investment.

The economy minister also referred to the agreements made during the recent trip of Iranian President Rouhani to Switzerland and called for accelerating implementation of agreements by Swiss government.

Turning to the powerful role of the Islamic Republic of Iran in the region, he pointed to the high economic and political potential of the country in the fight against terrorism in different forms and reiterated, “development, peace, security and stability in the region strictly hinges on lack of intervention of others and on avoiding measures that would lead to the spread of conflict and terrorism.”

Islamic Republic of Iran is ready to develop and expand economic ties with Switzerlandو especially on a regional level, Iranian Minister of Economy Dejpasand concluded.

For his part, Swiss Ambassador to Tehran Markus Leitner voiced readiness of his country for development of all-out ties with the Islamic Republic of Iran and called for participation of representatives from the Ministry of Economy in Iran-Switzerland Joint Economic Forum.