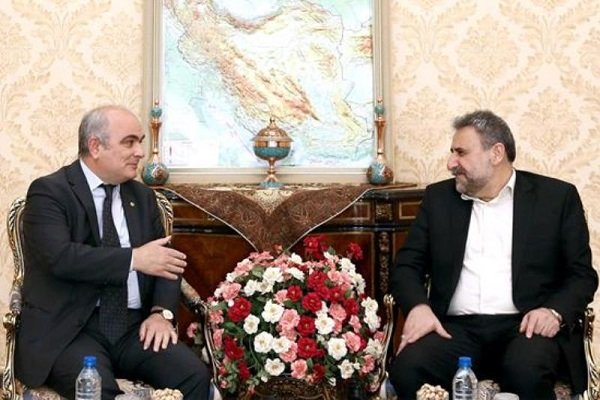 He made the remark on Monday in his meeting with the Chairman of National Security and Foreign Policy Committee of Iranian Parliament, Heshmatollah Falahatpisheh.

While condemning perpetrators of Zahedan terrorist attack which claimed the lives of 27 IRGC personnel on Wednesday, the ambassador reiterated that his country will back all-out development with the Islamic Republic of Iran.

He seized this opportunity to sympathize with the people and government and Parliament of the Islamic Republic of Iran especially the bereaved families of victims of the recent terrorist attack in Zahedan.

Elsewhere in his remarks, he said that cooperation between Iran and Russia is on a growing trend in all fields and Russia will throw its weight behind development of amicable ties with Iran.

Close cooperation between specialized parliament committees of the two countries plays an important role in developing and strengthening bilateral relations, he maintained.

For his part, Chairman of National Security and Foreign Policy Committee of Iranian Parliament, Heshmatollah Falahatpisheh pointed to the level of cooperation between the two countries in various fields and said, “cooperation between Iran and Russia is on a very of considerable growth in bilateral, regional and international dimensions.”

He went on to say that expansion of bilateral ties between Iran and Russia will play an important role in maintaining national interests of the two nations.