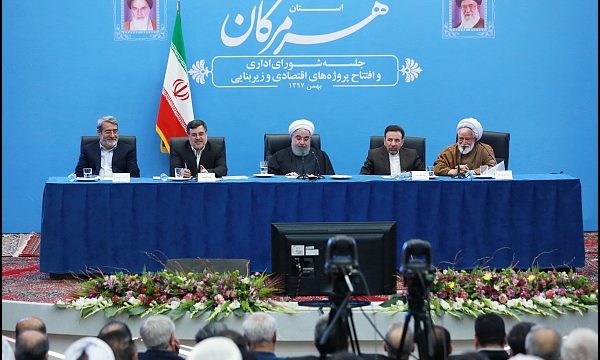 Iran’s power can be considered as power of region

MNA – President said that the defensive power of the Islamic Republic of Iran is for defending the country’s interests, adding “we have never intended to invade a land or a country, and this whole 40 years proves that we have defended ourselves well.”

Speaking on Sunday at the inauguration ceremony of Fateh-class submarine, Hassan Rouhani added “we have always stood against aggressors, but never driven by greed towards others”.

Appreciating the hard work of the Navy of the Army of the Islamic Republic of Iran, he said “without a doubt, the power than can defend the country’s interests from hundreds of miles away is the Navy.”

“The Navy is capable of defending not only our coasts in the Persian Gulf, the Oman Sea, the Caspian Sea and the Indian Ocean, but also the interests of the Islamic Republic of Iran with its presence and authority in international waters,” he added.

Rouhani continued “perhaps the enemies’ pressures and sanctions and the war with Iraq, which was imposed on us, motivated use more to be able to achieve self-reliance in the defence industry, especially in the maritime industry.”

He added, “perhaps if weapons were provided to us cheap, then we would not be able to make our defence industry domestic with this acceleration and motive.”

Expressing satisfaction over self-reliance of the Islamic Republic of Iran in ground, air and maritime defence, the president said “today, Iran’s power can be the power of the region.”

“Today, Iran and its friendly nations are a proud defence power in waters, ground and air in the region and do not need aggressors and illegitimate presence of trans-regional powers in the region,” said Rouhani.

The President of the Islamic Republic of Iran also said “Bandar Abbas and all southern ports of Iran, the Strait of Hormuz and all our territorial waters are witness and proof of Iran’s armed forces’ defending free shipping in the region and the flow of energy around the world, which suggests that Iran’s power is never a threat to others.”

He continued “it is clear that Iran’s capabilities and defence are deterrent against those who are driven by greed towards our land.”

Hassan Rouhani, Iran's Fateh submarine, Iran's regional position February 18, 2019
Zarif to Europe: Time to get wet if you want to swim against US unilateralism
Iran petrol output at 76 ml/d