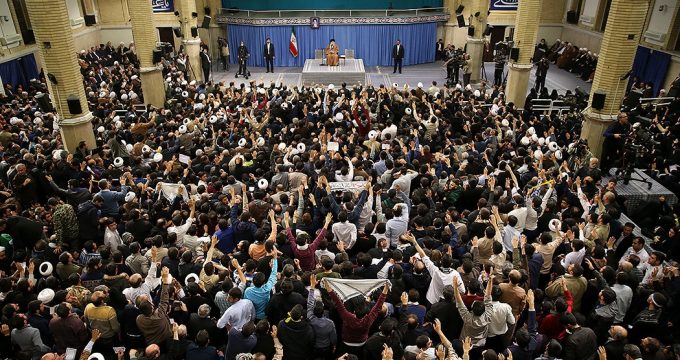 Tasnim – Leader of the Islamic Revolution Ayatollah Seyed Ali Khamenei described the failure of a recent anti-Iran conference held by the US and its allies in Poland as a sign of the enemy’s weakness, saying the US is gripped by a whole host of troubles, including social and economic woes.

Addressing a group of people coming to Tehran from the northwestern province of East Azarbaijan on Monday, Ayatollah Khamenei said the recent conference that the US organized in Warsaw against Iran went wrong.

“The half-witted American authorities invited a number of their collaborator governments as well as weak and intimidated governments to the Warsaw meeting for making decisions against Iran, but the gathering did not yield any result, and it all signifies weakness (of enemies), so the enemy which gets angry in a state of weakness begins controversy and vilification,” the Leader said.

Ayatollah Khamenei added that a number of so-called Muslim countries’ move to side with the Zionist regime and the US in the failed Warsaw meeting brought disgrace on them, stressing that those rulers of Muslim nations have already been discredited among their own people.

The leader further highlighted the numerous problems that the weak front of arrogant powers, led by the US, is facing, pointing to the troubles that the American society is grappling with, including “social problems, depression and frustrations of the youth, rising number of homicide and crime, rising drug addiction, friction between the US officials, and the bizarre debts” incurred by the US government.

Ayatollah Khamenei then highlighted the Islamic Republic’s potential for growth in the 40th anniversary of victory of the Islamic Revolution, saying that problems such as high costs, devaluation of rial, and domestic production challenges would be solved through patience, prudence, unity and seriousness of officials.

The Leader urged officials to be aware of the enemy’s plots and its deceptive ploys, saying the behavior of Westerners is truly fraudulent.

The strategy of the US is clear, as it is brazenly expressing hostility, but there is need for vigilance in dealing with the Europeans, because they behave deceptively, Ayatollah Khamenei warned.