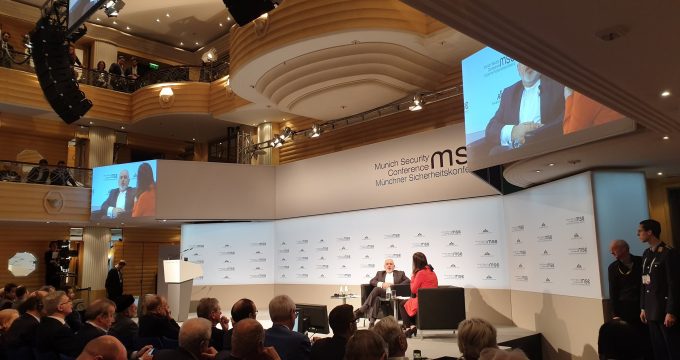 IRNA – Iranian Minister of Foreign Affairs Mohammad Javad Zarif strongly defended Iran’s missile program and slammed the West for selling weaponry and having dual standard regarding the human rights issue in the interview section of Munich Security Conference on Sunday.

Zarif said that has been negotiating the Joint Comprehensive Plan of Action and knows that there is no ban on Iranian missiles entirely.

He added that UN Resolution 2231 only bans development of missiles ‘designed to be capable of delivering nuclear weapons’.

Regarding the Western countries’ huge sales of weaponry to the regional countries, Zarif asked how Iran could defend itself in this situation if ‘another Saddam’ decided to kill Iranian people.

He said that when US President is selling ‘beautiful’ weaponry to Saudi Arabia while Iran receives no weapons, Iran will be defenseless.

Answering a question about resumption of talks with the US, Zarif said that Iran was at the negotiating table, like the other six countries, but the US decided to quit, while the other signatories of the Joint Comprehensive Plan of Action (JCPOA) are still at the table.

Iran receives ‘contradictory’ signals from the US; they announced 12 conditions for returning to the negotiating table, which meant surrender for Iran, he said.

About Iran’s staying in the 2015 nuclear deal, he said that Iran gets its security from the people and should keep them happy.

According to a survey done by Maryland University, 51 percent of the Iranians still believe that the country should stay in the deal, he said.

He also slammed the US demanding the Europeans to quit the deal.

Human rights for Iran are an issue of national security, not a moral nicety.

Answering a question about if Zarif would be more worried when leaving Munich, Zarif said that if Iran got its security from Munich, it would be worried, but they get the security from the people.